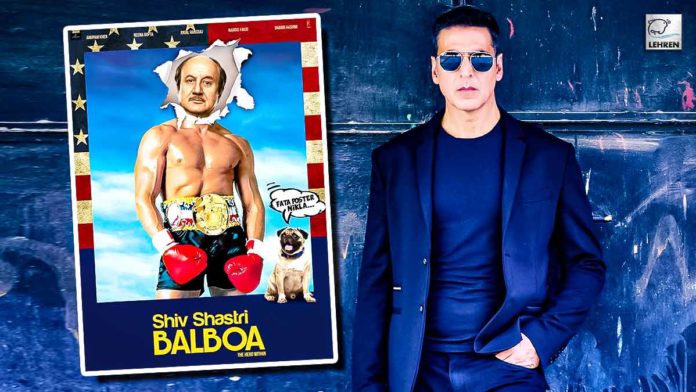 Anupam Kher shares a new poster from Shiv Shastri Balboa Poster, which will hit the theatres on 10th February.

Versatile actor of Bollywood Anupam Kher shared a new poster from his upcoming movie Shiv Shastri Balboa on his social media handles. He also announced that the movie will be released on February 10, 2023. He often shares updates about the film with his fans and today he shares another quirky poster from his upcoming flick. Reacting to the poster Akshay Kumar leaves a hilarious comment.

In the picture, Anupam’s face was face pasted on the body of Sylvester Stallone from the hit Hollywood franchise film Rocky. A dog next to him appeared to be saying “Fata poster Nikla… (the poster was torn and out came…).”

Reacting to the poster one user commented, “U have actually reversed your time Sir..started your career from a role which was above your age bracket in #saransh and u look so much younger at this age and doing #shivshastribalboa wow This is called Growth .. fantastic #transformation Thanks for inspiring a lot of us.” Another person wrote, Outstanding poster sir… looking forward for this one… loved it..

Akshay Kumar shared a poster of Shiv Shastri Balboa on his Twitter handle, and wrote, Maine aapko body banane ko kaha tha! par aapne toh kuch zayada hi seriously le liya (I asked you to make a body but you have taken my words quite seriously).