Ram Gopal Varma On KGF 2 & Kashmir Files Success: ‘They Have F*cked Up Everything’ 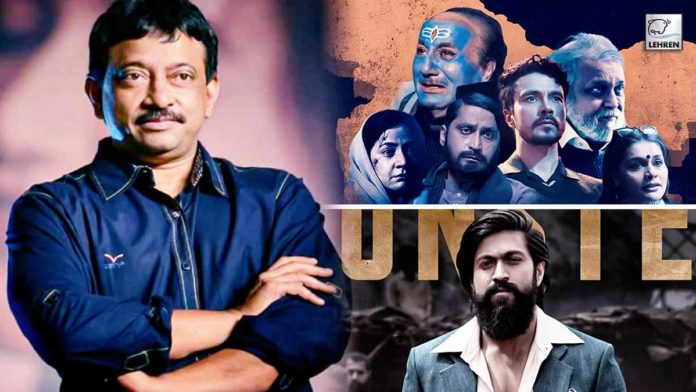 Ram Gopal Varma takes a brutal dig at the success of KGF 2 and Kashmir Files, saying, "Two films that have f**ked up everything are KGF - Chapter 2 and The Kashmir Files".

KGF 2 and The Kashmir Files are among two of the blockbuster hit films of the year 2022. Opening up on the same filmmaker Ram Gopal Varma stated that these two blockbuster hit movies have f*ked up everything. He further said that nobody in the Bollywood industry liked KGF 2, and yet it went on to become such a huge hit.

In a recent interview with Bollywood Hungama, Ram said, “Two films that have f**ked up everything are KGF – Chapter 2 and The Kashmir Files. They are the opposite ends of the spectrum. The scary part of KGF – Chapter 2 is that nobody in Bollywood liked it. When a film you didn’t like does such numbers, you’ll be confused and you don’t know what to do.”

He added,  “A very big director of Bollywood told me, ‘Ramu, I tried to watch it five times but I couldn’t go beyond half an hour’. He then got back to working on the script for his next film. While arguing over a scene, his scriptwriter reasoned, ‘But this kind of scene worked in KGF: Chapter 2, right?’! There’s a line in Hollywood, ‘You can argue with content, but you can’t argue with success’! Hence, whether or not you liked it, you can’t ignore its success.”

However, this is surely not the first time that Ram Gopal Varma bashed KGF 2 for it’s success, as earlier the filmmaker wrote a short note on his Twitter calling Yash’s film a “Dark Cloud”. In one of his tweets he wrote, “I think #KGF2 is like an enormous tree under whose shadow, no tree seems to be growing.”

In another tweet he wrote, “KGF2 is like a large dark cloud casting a doomsday shadow on all the other big films and the black clouds torrential collections are draining all other stars and star directors.” In his last tweet about the film, he wrote, “#KGF2 is like a quicksand just swallowing up all old-fashioned biggies.”

KGF 2 and The Kashmir Files are two of the most popular films of 2022. Prashanth Neel’s directorial KGF was a blockbuster and it got bigger ad better with its sequel released in 2022. KGF 2, made with a budget of Rs 100 crore grossed over Rs 1200 crore at the box office globally, making it the second highest-grossing film in Indian cinema.

Meanwhile, Vivek Agnihotri’s film The Kashmir Files was based on the killings and exodus of Kashmiri Hindus in the valley in the 1990s. Starring Anupam Kher, Mithun Chakraborty, Pallavi Joshi, and Darshan Kumar. The film became one of the first Bollywood films to cross the ₹300-crore barrier during the pandemic.