On the occasion of their parents’ anniversary, Sonakshi Sinha, Luv and Kussh launch House Of Creativity 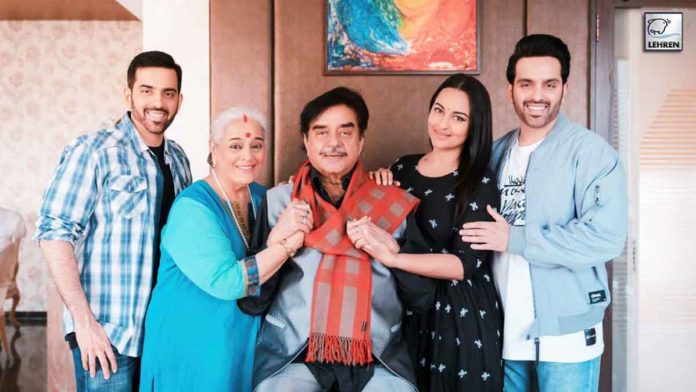 Sonakshi Sinha announced on Instagram, "On the occasion of our parents anniversary, we bring to you an art platform like no other: House Of Creativity."

On the occasion of their parents, Shatrugan and Poonam Sinha’s anniversary, their children Sonakshi, Luv and Kussh Sinha have launched House of Creativity.

House of Creativity (HOC), conceptualised and materialised by Luv, Kussh, and Sonakshi Sinha – partners in art in all senses of the term, promises to be such a one-of-its-kind online platform for the new post-2020 art world. With a choice team of experts behind the screen and a handpicked, ever-fresh selection of emerging Indian artists from across the world, House of Creativity (HOC) is first-of-its kind for many reasons. HOC will delight and educate art connoisseurs, advise and enriche new art collectors – and above all, display an ever-fresh online art collection for everybody.

Three distinct, dynamic, and fiercely individualistic styles of art-love – of Sonakshi, Luv and Kussh S Sinha fuel House of Creativity. They are partners in art because each have a long term practice of visual arts besides individual careers in acting, film direction, film production, politics and philanthropy. Sonakshi S Sinha has been painting since childhood and sustained her creative practice despite the busy career as an acclaimed actor and a beloved public figure. Luv S Sinha was inspired by his love for cinema to take up photography, whose social media showcase of stunning photographs have many admirers. Kush S Sinha, besides being a trained film maker has maintained a creative photography practice to which only a select few have been privy to, until now. These three sets of expert eyes – with artistic sensitivity and great taste in art – due to their wide exposure to the visual arts through their eclectic experiences and practices in many spheres of creativity- form the core of House of Creativity (HOC).

Luv Sinha shared the two inner drives for this online platform: “House of Creativity is a platform that represents our individual styles and creative work. We are all artistically different but are united by the passion of expressing ourselves creatively. We came up with the idea of HOC as I felt that there are many emerging and established artists in India who aren’t able to connect with a larger audience, and are focused primarily on those who belong to a certain demographic. We want to use our reach as a film and political family to provide a platform that will allow them to reach the maximum number of people possible. It is also a platform for us to showcase our own artwork to the world, and give them a chance to access something exclusive that won’t be something you can purchase anywhere else.”