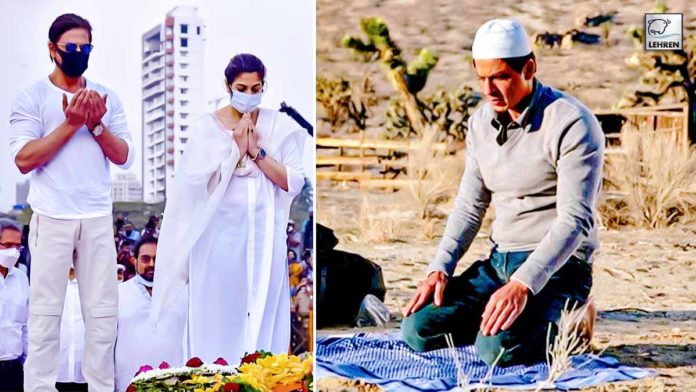 A scene from Shahrukh Khan's 2010 film 'My Name Is Khan' is going viral on the internet after his latest controversy around Lata Mangeshkar's funeral.

A clip from Shahrukh Khan’s film ‘My Name Is Khan’ is going viral on social media after he was wrongly accused of an act he didn’t commit. After the Aryan Khan controversy, Shahrukh Khan made his first public appearance recently when he attended Lata Mangeshkar’s funeral in Mumbai on Feb 6. He paid his last respects by raising his hands for a prayer and then blowing out air at Lata Mangeshkar’s mortal remains. As the pictures and videos surfaced online, Shahrukh Khan was slammed for allegedly ‘spitting’ at Lata’s mortal remains.

However, Shahrukh Khan’s well-wishers jumped in his defense and also schooled the ignorant people. A scene from ‘My Name Is Khan’ was shared online where Shahrukh was seen reading Namaz and then blowing out air on his son in the film.

Sharing the clip, a user wrote, “My name is Khan. Everyone liked it. Here too #ShahRukhKhan is praying. In the same manner as he had prayed on the body of #LataMangeshkar ji yesterday. Go back to the past and make the film flop bhakt brigade.”

Another tweet reads, “Muslims say a prayer on their breath and blow it, as if sending physical manifestation of it, on whomever they’re making that Dua for. Shah Rukh Khan did the same. He does it in My Name is Khan too. And I do it on my friends & family. Cultures are fascinating, get to know them.”

A social media user wrote, “Also in Islam, after praying for someone, some people like to blow the prayer on the person they are praying for (There was a scene in My Name is Khan with it). Srk did the same thing today at her funeral, and some idiots turned it into “SRK spits on Lata ji’s grave” Ridiculous!”

My Name Is Khan is a film directed by Karan Johar, starring Shahrukh Khan and Kajol in the lead roles.