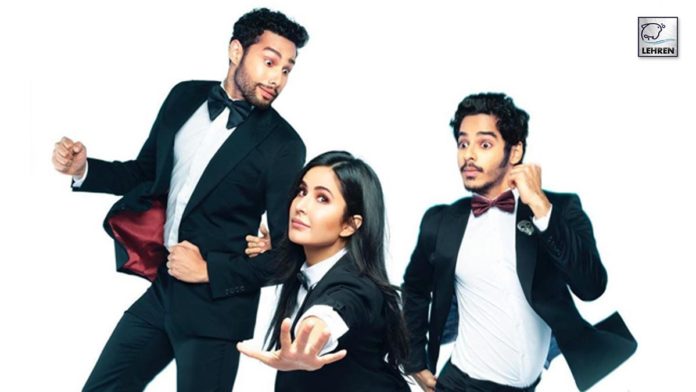 The makers of Katrina Kaif, Ishaan Khatter, and Siddhant Chaturvedi starrer PhoneBhoot are gearing up to start rolling for the film in the coming few weeks. Read below to know more.

A few months back, Excel Entertainment announced its upcoming venture titled PhoneBhoot. The film features Katrina Kaif, Ishaan Khatter, and Siddhant Chaturvedi as the main leads. A still from the film was put up on social media platforms and in no time the trio garnered a lot of attention. Everyone is now waiting for the three to share the screen space for the first time. As per the latest update, PhoneBhoot is likely to go on floors by November end.

The film helmed by Gurmeet Singh is a horror-comedy and the trio will reportedly play the role of ghostbusters. Not much detail is available about PhoneBhoot but owing to its genre everyone is anticipating its release.

Meanwhile, one of the main leads of PhoneBhoot Siddhant Chaturvedi is in Goa for Shakun Batra’s yet-to-be-title film. The Gully Boy actor was alongside the rest of the cast for an early reading session in Goa.

Speaking of Katrina Kaif, she has left for the UK to visit her family before kick-starting any of her pending work. Apart from PhoneBhoot, the actress also has Ali Abbas Zafar’s superhero film in her kitty. This film will mark India’s first female superhero film.

Ali Abbas Zafar’s upcoming venture is an action-packed thriller, and for that Katrina Kaif is undergoing intense physical workout. The shoot will reportedly begin in Abu Dhabi in January.

As of Ishaan Khatter, he recently featured in Netflix’s series A Suitable Boy. Apart from this, he starred alongside Ananya Panday in Khaali Peeli. The makers of the film took an OTT route amid the pandemic, thus the film is available on Zee5.

Coming back to PhoneBhoot, the three main leads will reportedly meet in Goa where the film will go on floors by November end. The makers are being extra cautious owing to the pandemic but are really excited to start rolling.