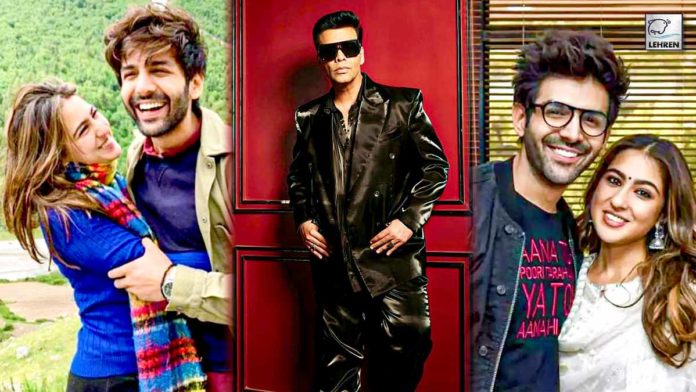 Bollywood filmmaker Karan Johar is known for his candid confessions and statements, making one of which Karan has recently confirmed in an interview that the ‘Love Aaj Kal’ stars Sara Ali Khan and Kartik Aaryan have dated each other claiming that his couch remains the manifestation for it. Read the whole conversation-

During the promotions of his chat show, ‘Koffee With Karan’ Bollywood filmmaker Karan Johar in an interview, opened up about how his couch has manifested celebrities’ relationships. He said, “I call this couch the couch of manifestation. I was like telling Kriti Sanon the other day, I said just say a name! Because Katrina on this couch said that she thought she would look good with Vicky, then Vicky collapsed, and then the next thing we know is that they are married. Sara Ali Khan mentioned Kartik and they started dating. Alia has mentioned Ranbir season after season and she is married to him today and is going to have his beautiful baby. So it’s fantastic that this couch has actually manifested so many relationships.”

For the unversed, Sara Ai Khan has earlier appeared on the chat show in 2018, during which she shared her crush list with the filmmaker and mentioned the Bhool Bhulaiyaa actor, Kartik Aaryan being attractive. The two have also collaborated in Imtiaz Ali’s directorial ‘Love Aaj Kal’ in 2020, however, it was rumored that the two parted their ways soon after.

Meanwhile, in one of the promos of the latest season of Koffee With Karan, the actress was seen talking about her ex, as Karan asked her why is her ex, her ex. To this Sara gave him a nasty saying ‘because he is everybody’s ex’. Her statement left netizens wondering if she was talking about Kartik Aaryan himself. However, the two actors have been spotted together a few times, in April a video surfaced on the internet in which both were seen sharing a talk during an award function, meanwhile recently the two were also papped together on the red carpet.