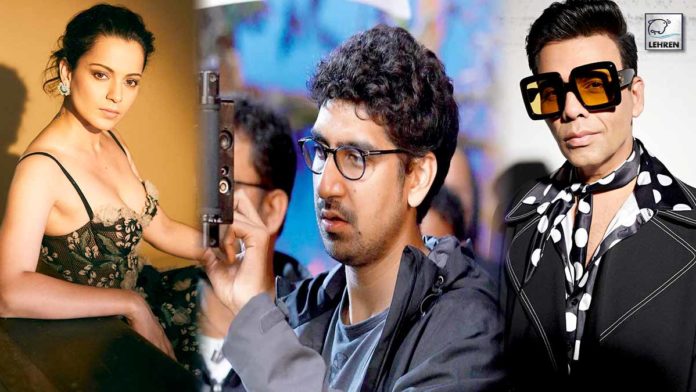 Brahmastra: Part One Shiva starring Alia Bhatt and Ranbir Kapoor was released on 9th September. The much-awaited fantasy adventure film is receiving mixed reviews from the audience and critics. Kangana Ranaut called the film a disaster and took a direct dig at the director Ayan Mukerji and producer Karan Johar. Hours after the release of the much-awaited movie Kangana made explosive remarks.

Kangana took to her Instagram, to share her thoughts against Brahmastra and the makers. Sharing a number of stories, in one story the actress indirectly asked Karan Johar to be jailed. As she said anyone calling Ayan Mukerji a genius for Brahmastra should be jailed. In her long note, Kangana wrote, “Everyone who called Ayan Mukerji a genius should be jailed immediately… He took 12 years to make this film, he replaced 14 DOP’s he shot for more than 400 days for this film and changed 85 ADs and burnt 600 crores to ashes. Also tried to exploit religious sentiments by changing the film name from Jalaluddin Rumi to Shiva last minute, because of Bahubali success…. Such opportunists, such creativity deprived people, success starved greedy people if called geniuses then it’s not manipulation but a well thought of strategy to call din ko raat and raat ko din.”

In another one, she claimed that KJo buys fake reviews and shares unreal box office collections. She also made a reference to Karan Johar’s chat show Koffee with Karan stating the host is interested in sex life. She continued in another story writing, “People like Karan Johar should be questioned for their conduct, he is more intrested in everyone’s sex life than in his films scripts, he self admittedly buys reviews, stars and fake collection numbers and tickets… this time around he tried to ride Hinduism and south wave … all turned Pujaris suddenly and begged south actors, writers and directors to promote their film … they will do everything but not hire competent writer, director, actors and other talent, why not in the first place hire those they went begging to fix this disaster called Brahmastra.”

After years of making Brahmastra: Part One Shiva was finally released on 9th September. The team is yet to respond to Kangana’s explosive claims and it remains to know what their reaction would be. Brahmastra stars Ranbir, Alia, Mouni Roy, Nagarjuna, and Amitabh Bachchan in the lead role and features a cameo of Shah Rukh Khan.