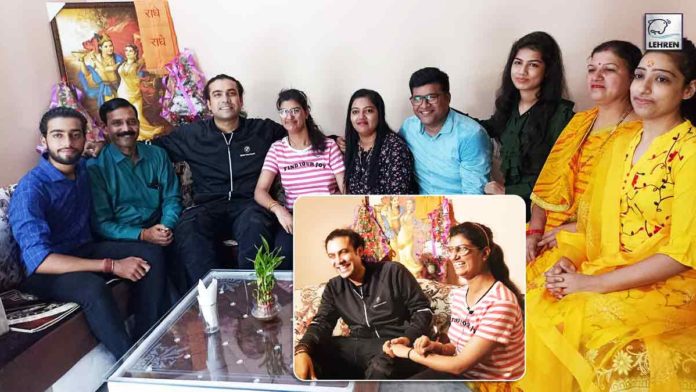 The renowned and versatile bollywood singer who has made a place in every person’s playlist is making a way into their hearts as well wherein Jubin surprises KBC 13 winner and his fan Himani Bundela.

Himani Bundela who is a visually impaired young Teacher from Agra became the first crorepati of KBC 13 on 1st September 2021. Kaun Banega Crorepati 13 host Amitabh Bachchan fulfilled Himani Bundela wish by letting her speak to her favourite singer Jubin Nautiyal, who is currently winning millions of hearts with his soulful voice and touched by his fan’s innocence, Jubin surprises KBC 13 winner and his fan Himani Bundela.

It was a really treasured moment and dream come true for her when Jubin surprises KBC 13 winner and his fan Himani Bundela.

It was her dream to meet Jubin Nautiyal and she sent him a voice message post winning the show. Touched by her innocence, singer Jubin Nautiyal decided to surprise her. The surprise was planned with the help of Himani’s sister and Jubin’s team went ahead and made all the required arrangements.

Jubin posed as a journalist and visited her house in Agra. While she spoke about her desire to meet Jubin and sang one of her favourite songs, Khushi Jab Bhi Teri, the singer surprised her as he broke into a song mid interview and she realised it was her idol sitting right beside her. What followed was an emotional moment as he sung the rendition of Khushi Jab Bhi Teri and she just couldn’t believe it. The video clip restores your faith in humanity and shows one how humble and grounded Jubin is!

Jubin said, “I was really touched when Himani sent me a voice note post the show and I knew it then that we had to meet her. When I met Himani in person, the vibes were so warm and pure love was all I received from her and her family. It’s an unexplained happiness that I feel when get to meet and interact with fans like hers. They are the future of our country and I’m so glad to see such brilliant minds come from all parts of India. Their affection and love is what gives me purpose to do more and spread love”.

It surely was a dream come true for the small town girl, Himani who was supremely overjoyed to meet her favourite singer merely because of her voicenote and mention on the quiz show. A moment of pride & honour of the family, Jubin Nautiyal’s visit will be etched in her mind forever and this video gives us a look into the beautiful bonding time the two of them had at her home in Agra. A kind, humble and heart touching gesture by Jubin Nautiyal has yet again bowled us over proving that celebrities do really care about their fans.

A small-town boy from Dehradun with big dreams, Jubin is now Bollywood’s most sought after singer. He is one of those artists in recent times who turned the table with his spell bounding voice and soulful music. With a fan following in millions and a reach across continents, Jubin is known for his excellent mastery over his craft and live performances. He has left no stone unturned to become a household name.