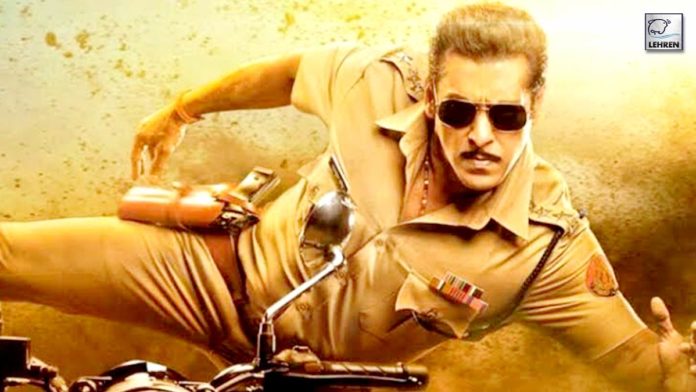 The return of Dabangg 4 might just be around the corner as Salman confirms the script of the movie is currently under work, written by Tigmanshu Dhulia.

India’s favorite cop movie is back! The Dabangg franchise is all set to welcome Dabangg 4 and sees Salman Khan and Sonakshi Sinha in the lead roles. The movie is expected to release in 2022 or early 2023 as per reports. Confirming the news of a possible release, Salman clarified how the movie is still in its starting phase and that scriptwriter Tigmanshu Dhulia, who has been working on the script for the last 1 year is expected to present it to Salman by next year. It is also said that for this very part of the movie, a very fresh look is given to the character of Chulbul Pandey, more of which is yet to be known.

While it is only worthwhile to wait to discover if Salman continues to play the character of a cop as usual in the movie, reports suggest that the character of Chulbul Pandey for this sequence is set to enter politics.

While Salman will only start with the shoot of the movie after the completion of his other projects which are all lined up for next year. These include “Kabhi Eid Kabhi Diwali”, “No Entry 2”, “Black Tiger”, “Pawan Putra Bajrangi” and a movie with filmmaker “Sooraj Barjatiya”.

Dabangg franchise apart from its iconic dialogues and characters is also known for its astounding box office collection. The entire franchise has been one of the most successful projects that Salman has ever bagged. Sharing about the success of the movie, Salman had shared how heroic movies are not about romancing a lady or fighting goons rather it is to fight against all odds and emerge as a winner. He forged added to the secret of the film, Salman believed it’s imperative to fill emotions in all parts of the film. Per Salman, even the action sequence should be backed with emotions.

Tigmanshu Dhulia is known for films like “Paan Singh Tomar”, and “Saheb Biwi Aur Gangster”. Salman Khan and his producer brother Arbaaz felt that Tigmanshu is the right choice to take forward the story of Chulbul Pandey as he is well versed with the rural world of India.