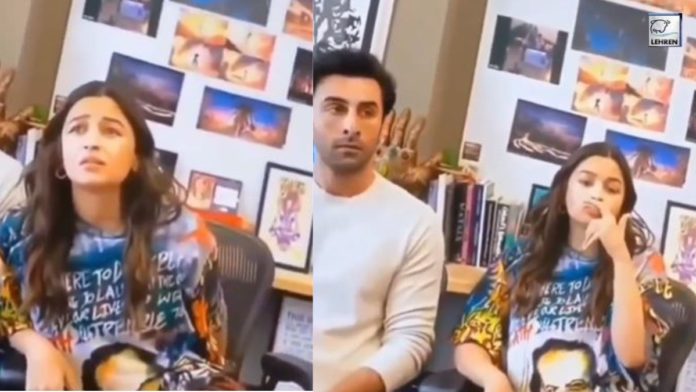 Fans are unhappy as Alia Bhatt is being criticized for allegedly farting during a live interview.

A short clip of Alia Bhatt is going viral across all social media platforms which allegedly shows her farting during a live interview and then smelling her own fart. The clip is from a promotional activity for her upcoming film Brahmastra. It shows Alia Bhatt adjusting her position as she touches her backside. She is then seen putting her finger in front of her nose.

The short clip was shared online on different meme pages and netizens began to troll the actress. A user wrote, “So unhygienic.. Disgusting” while another commented, “Ye Nepokids talented to bahot hai.” One netizen said,  “acidity is normal during pregnancy but have some shame wtf alia.”

Check out a few tweets:

This short clip has reached millions of internet users who are now trolling the actress. However, some internet users are also being mindful and have refrained from making any judgements. A user wrote, “Making fun of a pregnant woman is so cheap.”

A user also claimed that this is a cleverly edited video. He wrote, “Y’all are so disgusting. Mocking a pregnant woman just for your fun, she was adjusting her mic and you edited that part of the video. So low!! Shame on you.”

Meanwhile, Ranbir Kapoor is also facing backlash for making fun of Alia Bhatt’s weight gain during pregnancy. During the same interview, when Alia said, “we will promote the film (Brahmastra), and we will be everywhere but if the question you are asking is why we are not phailod (talking about widespread promotion) everywhere, right now our focus is…” Ranbir Kapoor immediately pointed at Alia Bhatt’s baby bump and said, “well I can say somebody has phailod (indicating her gaining weight). He immediately added that he meant the comment as a joke.

A netizen said, “I hate him for this joke. I would have been truly pissed with my husband if he said this while I was pregnant. He really can’t be nice to his gfs. Reminds me the typical toxic rich Punjabi boy which I have come across in Delhi.”

Someone else wrote, “Eh, it isnt even a good joke. Most women already have a hard time accepting the changes pregnancy brings to their bodies, joking about it is just insensitive.”