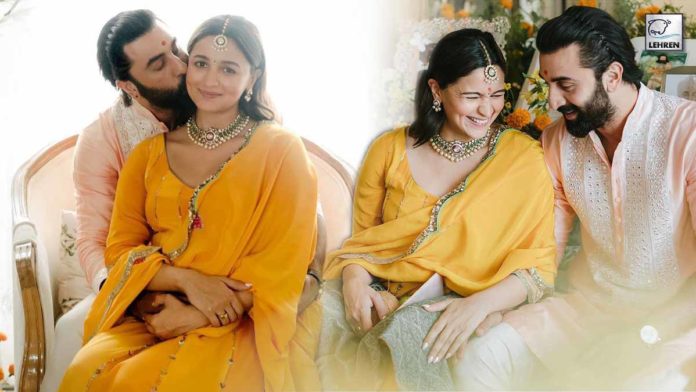 Alia Bhatt and Ranbir Kapoor got married on the 14th of April this year and are expected to welcome their first child together in November.

Ranbir Kapoor and Alia Bhatt seem to welcome their first child together soon. The Bollywood lovebirds arrived at HN Reliance Hospital in Girgaon, Mumbai at 7: 30 am today reportedly for delivery. However, some fans also think that they might have come for her routine check-up. Previously, multiple media outlets reported that Alia’s delivery date is anytime between November 20 to November 30.

Last month only, Alia and Ranbir hosted a baby shower with her close friends and family members. On June 27, the couple has taken to their respective social media accounts and announced that they were expecting their child together soon after their marriage. The announcement features a photo of Alia from the hospital where she is undergoing her sonography test, while Ranbir is seen seated next to her.

During her pregnancy, the actress continued to shoot for her first Hollywood film ‘Heart Of Stone’ in Spain with Hollywood actress Gal Gadot and promoted ‘Brahmastra’. Recently, the actress also launched her maternity wear ‘Edamama’. However, Alia and Ranbir were not seen at any Diwali parties or Bollywood gatherings in the last two months.

Moreover, the two have been maintaining a rather low profile and almost no presence on social media. Alia and Ranbir got married after dating each other for almost five years. For the unversed, the actors met on the sets of Ayan Mukerji’s ‘Brahmastra’ and soon came close to each other. Alia Bhatt and Ranbir Kapoor got married on the 14th of April this year in an intimate ceremony held at the actor’s residence in Bandra.

Meanwhile, on the work front, both Ranbir and Alia recently appeared in Ayan Mukerji’s film Brahmastra which was a blockbuster hit. Apart from it, Ranbir has many films under his belt including Animal with Rashmika Mandanna, Luv Ranjan’s next with Shraddha Kapoor, Brahmastra 2, and others. Alia Bhatt on the other hand has Rocky Aur Rani Ki Prem Kahaani with Ranveer Singh, Jee Le Zaraa with Priyanka and Katrina, and many other films.

ALSO READ – Alia Bhatt-Ranbir Kapoor To Welcome Their Child In November? Here’s What We Know