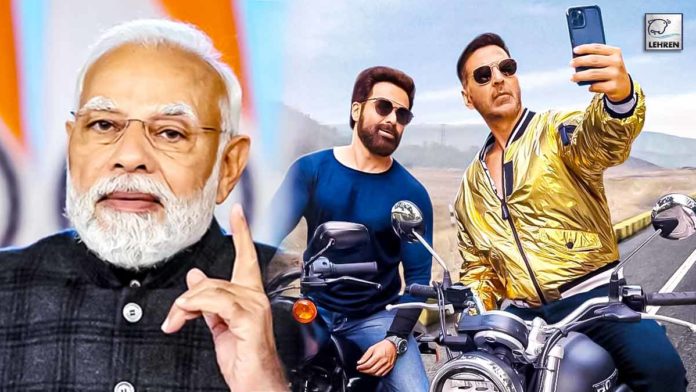 Selfiee trailer launch postponed due to PM's visit to Mumbai

Akshay Kumar starrer Selfiee which is set to be released in February 2023, was supposed to have a trailer launch today but it has been postponed to 22 January.

The news came from the creators of Selfiee that the trailer will be unraveled on Sunday. From the sources, we came to know that there were plans to host a major trailer launch event in Mumbai. However, two factors prevented them from doing so as quoted by Bollywood Hungama. The first reason was that Akshay Kumar’s flight from London was delayed. It is now expected to land in Mumbai later today.”

Secondly, Prime Minister Narendra Modi will have a major visit to Mumbai today. He will head to the Bandra Kurla Complex (BKC) to address a large crowd. Later he will go to Andheri East to inaugurate the two metro lines 2A and 7. Police have restricted vehicle traffic on the Western Express Highway and in BKC and subway line, 1 is reduced at night. As a result of this, no media people will be able to make it to the event.

They also quoted that “It’s a practical decision made by the producers. We don’t want to bother the media on a day when traffic could get out of control. Because of this, the release of the Selfiee trailer has been postponed. A new trailer release date will be announced soon.”

Alongside Akshay Kumar and Emraan Hashmi, Selfiee also stars Nushrratt Bharuccha and Diana Penty. It is the official remake of the acclaimed Malabar film Driver’s License (2019). Selfiee is said to be the remake of the 2019 Malayalam-language comedy-drama Driving Licence. It features Prithviraj Sukumaran as a superstar and Suraj Venjaramoodu in the role of a motor vehicle inspector.