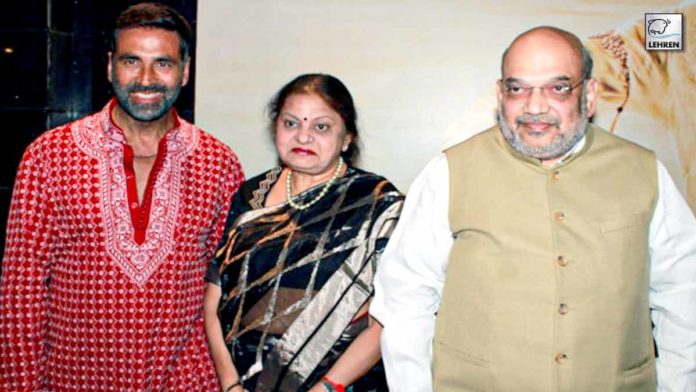 Samrat Prithviraj is close to its theatrical release but before that Akshay Kumar hosted a special screening for Home Minister Amit Shah. The superstar will recreate the character of king Prithviraj Chauhan of the Chauhan dynasty in the film. The periodic action drama revolves around the fearless and mighty King Prithviraj Chauhan as he fights against Muhammad Ghori of the Ghurid dynasty. It also tells about the first Battle of Tarain between the 12th-century ruler.  Akshay calls it a rare honor to conduct a screening for Home Minister before its’s release.

Sharing the experience, Khiladi Kumar got emotional to hear praises from the minister. He took over his Instagram account to upload a picture of him with honorable Amit Shah. He captioned the post: “A very emotional and proud evening for me. Had the rare honour of having Hon’ble Home Minister Amit Shah ji watch #SamratPrithviraj. Unki hamari film ke liye prashansa ne hamari mehnat safal kar di (His appreciation for our film has made our hard work successful)! Ever so thankful,” added a hand-folded (namaste) emoji in the end.

Hon’ble Home Minister Amit Shah was all praise after he watch the with his family members. The special screening was conducted in New Delhi on June 1. Mr. Shah himself being a history student enjoyed watching the film and appreciated the cast the crew and the makers. He revealed that he watched a movie with his family in theaters 13 years ago before this.

Amit Shah said: “As a student of history, I not only enjoyed watching this film depicting India’s cultural heritage but also understood its importance for Indians. I have seen a film in the theatre with my family after a gap of almost 13 years. It was a very special day for our family as we sat in the last row of the theatre with the cast and producers of the film.” He also added that the film portrays the political power and freedom of women to make choices in the medieval period.

Akshay Kumar in the lead is also joined by Sanjay Dutt, Manav Vij, Sonu Sood, Ashutosh Rana, and Manushi Chillar who will essay the role of Sanyuktha. Earlier titled Prithviraj but then changed to Samrat Prithviraj will release on June 3 all over India in Hindi, Tamil, and Telugu.