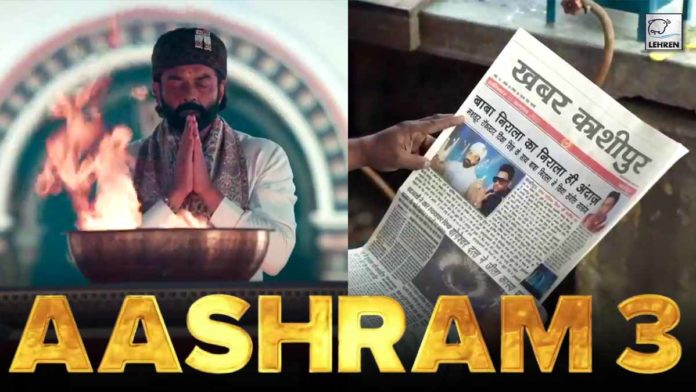 Bobby Deol's upcoming series 'Aashram season 3' is all set to make its way to the audience with its trailer released.

Popular web series Aashram is all set to make its return on MX Player with season 3. Fans are super excited for Aashram season 3 for its plot, chart popping popularity. It is an original MX Player series.

Fans have been eagerly waiting for the trailer of Aashram season 3. On 12 May, Bobby Deol announced that the trailer will be released on May 13.

The show is a crime drama that revolves around a baba Nirala aka Monty, who has a wide number of followers, and thinks that he is a saint but in reality, it’s not true the baba is a conman. In the second season of the series, it has been cleared by the makers, now the third season will be interesting to watch whether the baba will get caught for his miscreants or not. Being a conman he is quite talented in hiding his true intentions from the public and wears a mask of pretense before his devotees. Ujagar Singh, a cop, directs himself towards capturing Baba Nirala who doesn’t seem at all like the person he is supposed to be. The skeletons and dead bodies on the Ashram property further act as a catalyst that adds to the story.

The show is written by Habib Faisal, and Directed-produced by Prakash Jha himself, under his own banner Prakash Jha Productions. The series has two seasons. both were being premiered on MX Player.

The first season of it premiered on 28 Aug. 2020 and the second season was premiered on 11 November 2020. While both the seasons have had 9 episodes each. The third season is also expected to consist of 9 episodes. If the production of the show is concluded on time, it will be premiered by summer 2022 on the streaming platform MX Player. Chandan Kowli is the cinematographer and the editor is Santosh Mandal.

Bobby Deol starrer Aashram’s shooting was ongoing in October 2021, and the sets were vandalized by right-wing group members who threw ink at director Prakash Jha. by accusing the makers that they are hurting their religious sentiments. The shooting was being held in Bhopal, Madhyapradesh.

ALSO READ: When Rajpal Yadav’s Wife Made A Funny Comment On His Height