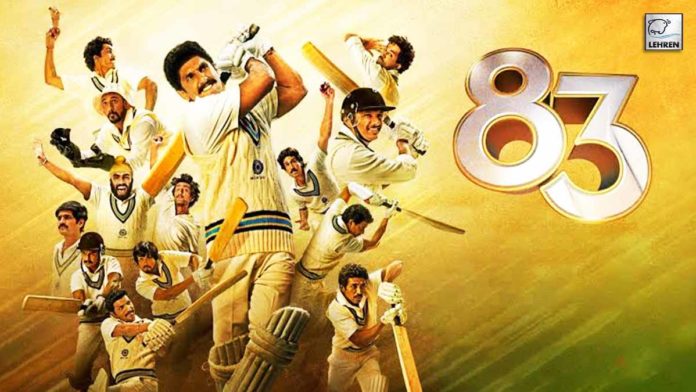 Gaiety Galaxy, which is also run by those who run Martha mandir, has also removed the screening of the movie.

It was only a few days back when Kabir Khan’s directorial “83” had landed in a legal dispute when advocate Rizwan Siddique stated that his client, FZE, had filed a criminal complaint against all the producers of “83” on the grounds of cheating and criminal conspiracy.

And now after the release of the movie, right from audiences to critics, all have applauded Ranveer and the team for their performance in the movie, but new trouble seems to have occurred.

The movie finally had released in theatres after a long battle between studios, Reliance entertainment, and exhibitors. Exhibitors were compelled during Diwali to not play any movies except Suryavanshi, as a result, many cinemas could not release Eternals as all the shows were given to Sooryavanshi. The move was accepted by exhibitors as they too were desperate for a big release like Sooryavanshi after the pandemic. While Reliance entertainment decided to adopt the same approach this time too, with 83, only this time they asked for 100% show sharing for 2 weeks and also demanded 70% revenue share from single screens in Week 1. Exhibitors however had to reject this as this would’ve meant removing Allu Arjun’s “Pushpa” and Tom hollands “Spider-Man: No way home” from screwing, both of which are running pretty successfully. Not only this, accepting to the deal, exhibitors were also to play Shahid Kapoor starrer “Jersey” that release next Friday.

When Reliance realized that exhibitors are being too adamant with their stand, they decided to do soft on them and tried relaxing some norms. They agreed to allow exhibitors to carry on with some shows and even reduced the screen revenues to some extent. Everything seemed to go as planned until yesterday when it was revealed that ‘Maratha Mandir’ and ‘Gaiety Galaxy’ have decided to not release 83.

“As of now, Gaiety has kept 3:30, 6:30, and 9:30 shows vacant and not given to any film. If the issue is resolved, then ’83 can play from 3:30 pm onwards. Maratha Mandir, meanwhile, has allotted 3:30 and 9:30 pm shows to Pushpa and 6:45 pm show to Spider-Man: No Way Home and have opened up bookings, as per this schedule, till Thursday. It’ll be interesting to see if “83” is played in this cinema from tonight or tomorrow, should the issue be resolved amicably” the source added further.