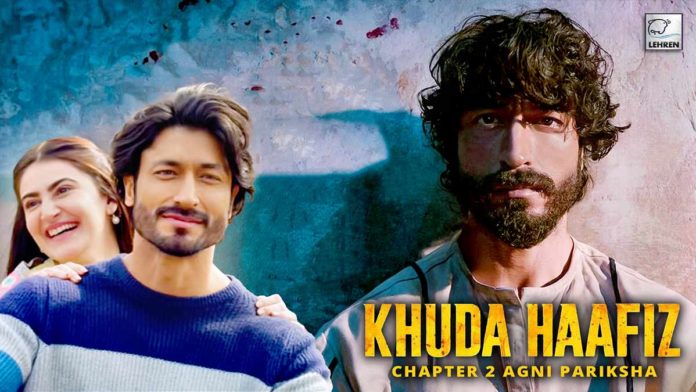 Khuda Haafiz: Chapter 2 is an action thriller film starring Vidyut Jammwal and Shivaleeka Oberoi. It is directed by Faruk Kabir and produced by Panorama Studios.

In the 1st edition, when Nargis (Shivaleeka Oberoi) was kidnapped and sold to a brothel, husband Sameer (Vidyut Jammwal) went to this fictitious middle east country, broke bones, clobbered heads, exposed the corrupt and brought her back.

But PTSD (post traumatic stress disorder) following kidnap and gang rape is a different challenge for the caring husband. She’s been saved but dealing with the demons in her head that scarred her are her daily agni pariksha.

And just when Sameer finds the right prescription to have Nargis smiling with joy again, it’s déjà vu. The little girl they’ve adopted has been kidnapped.

If rape-n-revenge is the franchise’s one line mandate to itself, writer-director Faruk Kabir uses it well. He also makes max use of Vidyut’s A-level action skills once the revenge sets in and, despite the goriness that follows, it is a relief. There’s only that much of Vidyut’s strained attempts at emoting as the Ram-like husband the viewer can take. So when it’s time for action and he heads for Egypt, you sit back and know that Vidyut is finally on familiar territory.

But don’t sit back and relax as the action is so bloody with ears being chomped that I for one watched most of it through my fingers.

The likeable spillovers from the 1st instalment of Khuda Haafiz continue to be the seamless inter-faith marriage of Sameer and Nargis, there’s no big deal made of it. It’s also welcome that a rape survivor has a life ahead of her. Gulzar had dealt with it way back in 1978 when he made Ghar where Rekha as wife Aarti was gang raped and her husband, played by Vinod Mehra, nursed her back to normalcy. It was a departure from what Hindi cinema used to espouse those days – that the raped had to end their lives.

But that bit of today’s thinking is offset by what Kabir thinks is a mandatory update. He makes a bow to woman power by casting Sheeba Chaddha as Thakurji the don and 2022 also means a thoroughly unnecessary lesbian angle.

The franchise is also the glorification of vigilante justice. The system does it to the victim and that’s the launch pad to showcase Vidyut’s unique prowess. He as Sameer the avenging machine doesn’t let you down.