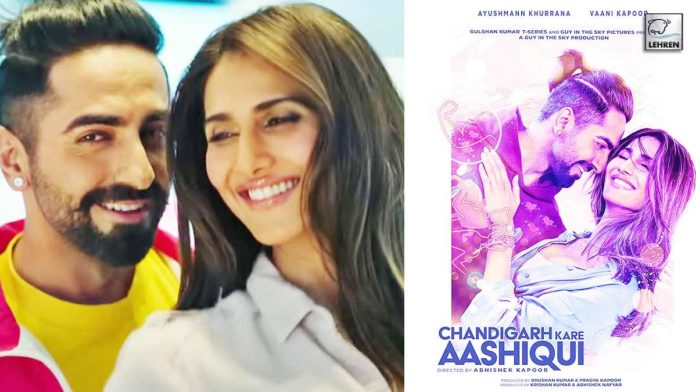 Chandigarh Kare Aashiqui is a romantic drama film directed by Abhishek Kapoor and produced by T-Series. It features Ayushmann Khurrana and Vaani Kapoor in the lead roles.

‘In memory of Sushant Singh Rajput’ is the first line before Ayushmann Khurrana takes over and skates on thin ice again.

Buffing up to play credible bodybuilder Manu Munjal, out to win the title of Chandigarh’s sabse taaqatvar title, may have been the physically gruelling part of his latest assignment. But the actor who has had the mental strength to go impotent (Shubh Mangal Saavdhan), go bald (Bala), wear a saree (Dream Girl) and play a sperm donor (Vicky Donor), among other image-defying assignments, continues his adventurous streak.

Falling in love with and making love to attractive Zumba teacher Maanvi Brar (Vaani Kapoor) who discloses that she’s a ‘transgirl’, makes him retch. Has the most macho man of Chandigarh just made love to a man?

Accepting sex reassignment surgery is not an easy social thought to put across. But director Abhishek Kapoor, with Tusshar Paranjape and Supratik Sen helping him in the writing department, makes it acceptable and watchable by not taking the preachy or the arty route. Instead, he experiments with a genre he’s not really known for – a light-hearted, breezy, Khurrana-style narration.

The unfamiliarity of the pivotal subject is handled by the use of familiar, easily relatable, feather-weight moments built around Manu and his Punjabi-spewing family. The tone is set with the heavy thud of his gym weights that has his grandmother screaming at him from one floor below.

The pinch of emotions comes from the social and familial rejection Maanvi has faced all her life, with only her father (Kanwaljeet Singh), an ex-army brigadier, declaring his support. She’s been both his beta and his beti, says dad.

Manu represents society in general as he grapples with understanding, coming to terms with and finally accepting his girl who has undergone sex-change surgery. Baffled onlookers, including her family and his, plus friends like the twins (Gourav and Goutam Sharma) who are Manu’s constant companions, register all the reactions that one is used to seeing in real life. They range from unawareness, anger, disappointment and shame to laughter, curiosity and wanting to taunt.

Alongside the mind-bending core is Manu’s own track of vying for the toughest man title, pulling a truck packed with guys and adding more weights than the competition demands. His is the safe track of applause for the hero who upstages the reigning No 1. But is it a safe track as the hero who’ll take on the world for the woman, the ‘transgirl’ he loves?

While the OTT viewer may take it, it could be risky territory for the theatre-going audience. Will they throw up like Manu did at first? Will they go agog with shock like Manu’s family that called her a ‘kinnar’ (transgender) with videos of Maanvi going viral?

In the past, Ayushmann and Abhishek have individually shown that they’re unafraid of the untested and have recorded much success with it.

Vaani Kapoor also steps up as a heroine willing to back high-risk diversity in her career.

As a film with the right mix of smiles, jibes, tears, and battles to be won, it works.

However, the heavy dose of Punjabi which adds to its authenticity, comes with chiselling away some of the audience.

Also, one couldn’t help but notice that Abhishek Kapoor, who began his slanted Hindu-Muslim cinematic narrative with Kai Po Che, and endorsed it with Kedarnath, continues to showcase the ‘bigoted Hindu’. Even though this Chandigarh story did not require the sub-text of Manu’s father (Girish Dhamija) having a Muslim girlfriend, it is pushed in.

For a happy ending, like the ‘transgirl’, the Muslim ‘ammi’ too has to get acceptance from the ‘intolerant’, a thought that seems to have become a constant in Abhishek’s cinema.