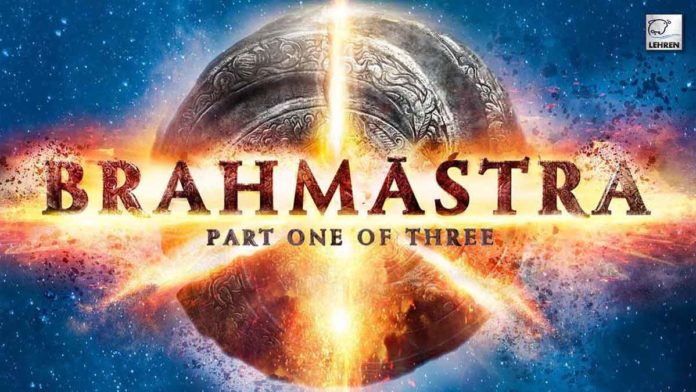 Astraverse, Hindi cinema’s offering to the Marvel generation, starts off with novelty and curiosity value.

The search is on for Brahmastra, the ultimate of all astras (weapons). Saare astron ka devta, the God of all weapons. Junoon (Mouni Roy) and two killers, with superpowers of their own, destroy everything and everyone in their path to lay their hands on it.

What is the connection between Shiva and fire?

He’s instantly attracted to Isha (Alia Bhatt) but where does she fit into the puzzle?

Against a backdrop of Dussehra leading up to Diwali, writer-director Ayan Mukerji makes an exuberant start. Mixing festive visuals and the dazzling ghats of Varanasi with special effects and laser beams, he dives into action right away with scientist Mohan Bhargav (Shah Rukh Khan with the Vanastra) pitched opposite Junoon and her devils. SRK’s charm carries off the scientist well.

Shiva the orphan exudes positivity, the kind that looks for light to dispel darkness. There’s energy in his romance with Isha, him jumping into an open lift, both jumping walls and terraces and breaking into song and dance. Pritam’s compositions ‘Dance ka bhoot’ and ‘Kesariya tera’ with drumbeats in the background score when Shiva-Isha find artist Aneesh Shetty (Nagarjuna Akkineni with the Nandiastra that has the strength of a thousand bulls) keep it feisty. High speed action in a car (a bit overstretched), an edge-of-the-cliff escape and the entry of Guruji (Amitabh Bachchan) who has answers to all questions, are all designed for pumping the adrenaline.

One hour twenty minutes later, the dynamic start begins to slump. The questions take another tone. Why is Dimple Kapadia walking in and out of the screen in an inconsequential appearance? Why is every sequence playing on and on while the pace drops until it droops? Sure, Shiva discovers the fire in him, aag laga doonga gets a new meaning. And ‘Deva deva’ where he joyously plays with fire is a catchy tune. But that goes on and on too.

Soon it gets confusing. Who’s throwing what astra and who’re all the new faces out there? Like the unexplained nod to the North-East with a kid called Tenzing.

By the time Ayan winds up his first instalment, it’s a ‘verse’ that’s overdone, crying out for simpler, crisper storytelling. Perhaps it’s all clear in Ayan’s head and he’ll give clarity in the intended next instalment titled Dev.

But that doesn’t work as an introduction to a new story especially when there’s chaos and confusion going on. As they say, first impressions are lasting.

Disappointingly, for all the effort that’s obviously been put in, there is a disconnect, a distinct, ‘You’ve lost me’ feeling in the viewer. For instance, there’s an attempt at a Mr India moment where Shiva is surrounded by kids who’re orphans like him. But it doesn’t have the heart-tapping impact of Shammi Kapoor’s Brahmachari or Anil Kapoor’s Mr India though it is rather cute when the kids track Isha on Facebook.

Most of all, Ranbir Kapoor and Alia Bhatt who are otherwise good at their craft, seem to merely mouth their dialogues without stirring intense passion. One can’t help wondering if the actors were overwhelmed with having to perform against a blue screen (or green) knowing that special effects will later be zapping around them.

Whatever the reason, when special effects douse the heart, the storytelling takes a hit.