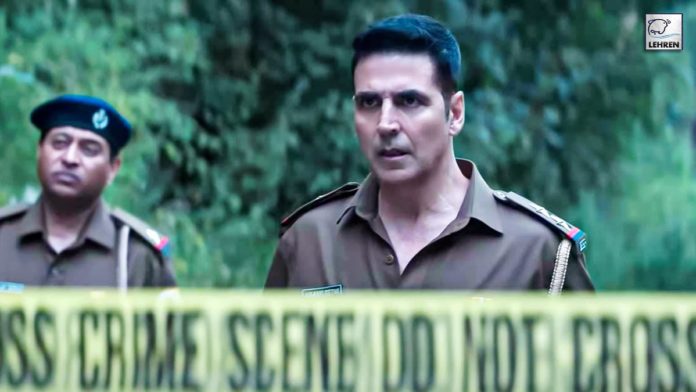 When a serial killer is on the loose and the victim is always a young schoolgirl whose body is found wrapped in plastic with a brutally mutilated face and multiple injuries inflicted only to make her writhe in pain, it is a discomforting visual.

Arjan Sethi (Akshay Kumar) has a rather interesting background. His father was a cop, he could qualify and fill in the vacancy that’s on offer. But with a nose for crime, his research has been deep, his collection of crime cuttings almost like a library. And he wants to turn his study of crime into a film. But with no producer coming forward to make it, he has no options left. He joins the police force in Kasauli, Himachal Pradesh.

When a schoolgirl goes missing, Arjan’s 7-year research in crime sniffs a serial killer. But he’s a lowly Sub Inspector and SHO Parmar (Sargun Mehta), a lady given to old methods of thrashing usual suspects, is in no mood to entertain his theories.

The premise is set. It takes another killing for colleagues to begin respecting Arjan’s study of psychopaths. Finding this maniacal killer pumps the adrenaline more than making a film.

Director Ranjit Tewari and writer Aseem Arrora faithfully follow the template of Ratsasan, the Tamil original, which brings the crime closer home than Arjan would’ve imagined, turning it into an even more personal mission. Stalkers, sadistic male teachers who sexually harass students, mesmerising magic from a professional magician, the speech and hearing impaired, everybody has a part to play in reaching the psychopath. Once Arjan is on the trail, all colleagues fade into the background, leaving room for solo heroics.

All one can reveal is that it is creepy how far bullying of a different child can damage his/her psyche forever.

Cuttputlli is practically a copy-paste job for Ranjit and Aseem which is fine for the crime part but required a bit of change when Akshay Kumar stepped into the lead role. There’s a scene in the Tamil original where he first meets Divya (Rakul Preet Singh) pretending to be the father of his niece and Divya remarks that he looks too young to be her parent. To retain the same scene and dialogue when 54-year-old Akshay Kumar is the hero is unintentionally humorous. However well maintained he may be, nobody would remark that he doesn’t look like the father of a schoolgirl. It’s the same when he enters the police force – too old to pass off as a newbie. Forgetting to make the hero age-compliant continues to afflict filmmakers. Since Ratsasan is available on OTT, most crime watchers would’ve already seen it. It’s a sensible move by the producer and by Akshay to go straight into an OTT release and save themselves another embarrassment at the box-office.