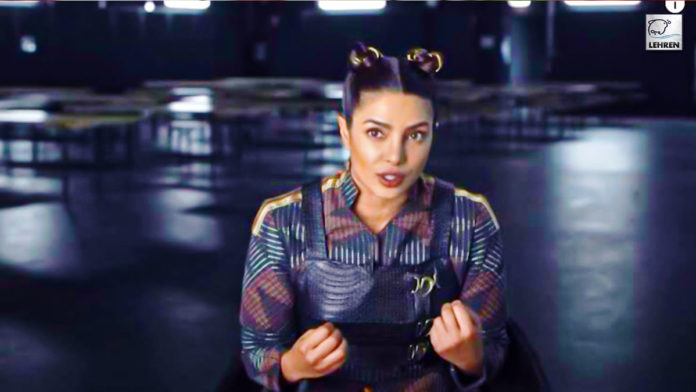 Priyanka Chopra portrays the role of adult ‘Sati’ in the Keanu Reeves starrer film of the Matrix series.

“Remember what is real. Watch the new trailer for “The Matrix Resurrections” now – in theatres and on HBO Max 12.22.21.”

With Priyanka making her fans proud with her international performances, fans were keen to see what part of the movie the actress would be portraying. Finally, it had been clarified with the Warner bros publishing an official note that talks about Priyanka’s character in the film. She will be seen acing the role of adult ‘Sati’ per the note, the character was previously played by Tanveer K Atwal in The “Matrix Revolutions”.

“young woman with a wisdom that belies her years and an ability to see the truth, no matter how murky the waters” further adds the note released by Warner bros.

Fans are ecstatic to watch Priyanka play a character that has a strong touch of Indian connection.

“Omg! Amazing! Such a befitting role for her,” while another one commented saying, “Have always wanted her to get roles with powers” commented one happy fan.

Previously dividing about the movie she had shared,

“They had me at ‘Neo and Trinity are back! The Matrix trilogy defined my generation of cinema. It was the gold standard… something we all role played and referenced all our lives! So, here I am… a small, excited little fish in the huge cinematic pond that is The Matrix!”

“Needless to say, I am honored and thrilled to be a part of this legacy and to have had the experience of working under the tutelage of Lana Wachowski and alongside this incredible, iconic cast. If you’re a fan of the franchise, you’ll know that ‘Unfortunately, no one can be told what the Matrix is’… so just give in. The Matrix is different things to different people and having got a glimpse of what’s coming, I would love to hear your thoughts!” she had added more.

Apart from that, the movie will have actors like Jessica Henwick, Christina Ricci, Neil Patrick Harris, and Jonathan Groff (popular from Mindhunter) who will be a new face to the audience in the series.

All set to release on 22 of December this year, The movie revolves around Plagued strange memories, as Neo’s life takes an unexpected turn when he finds himself back inside the Matrix.