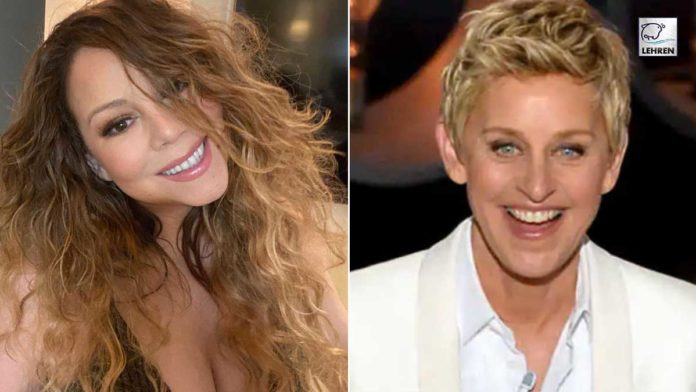 Mariah Carey recalls having had a miscarriage when Ellen DeGeneres forced her to reveal about being pregnant. This incident happened while Mariah graced Ellen’s show in 2008. Read below to know more.

American TV show host, Ellen DeGeneres is currently going through one of the worst phases in her life. At first, Ellen got bashing for non-payment of dues, and a pay-cut of employees on the show amid the lockdown. Recently, Mariah Carey recalled suffering a miscarriage when Ellen forced her to reveal pregnancy news.

The incident happens after many of Ellen’s former and current employees stood up to talk about the ‘toxic work environment’. Reportedly, Ellen conducted a Zoom call with all of them and had a meltdown.

Apart from the employees, some guests on the show also are sharing their awkward experiences while on The Ellen DeGeneres’ Show. And Mariah Carey happens to be the one of many.

The Without You crooner who graced the Ellen Show in the year 2008 has now revealed an uncomfortable incident. Apparently, Mariah was expecting while she was on the show but was willing to keep it a secret.

Although there was tittle-tattle around in the tinsel town, Mariah kept it under wraps. However, Ellen forced the singer to reveal if it’s true. Indeed the latter tried to dodge the question.

But what followed next is what haunts the singer till date. Ellen tried to make Mariah prove the same by drinking a glass of champagne. It is quite obvious that the then 38-year old singer was not ready to do it.

Ellen kept shouting, “You are pregnant.”

Alas, Mariah had to open up and finally revealed to have been expecting a baby. Mariah Carey recalled suffering a miscarriage just before the Ellen DeGeneres show.

In her recent interaction with Vulture, Mariah revealed, “I was extremely uncomfortable with that moment is all I can say. And I really have had a hard time grappling with the aftermath.”

She continued by saying that indeed she wasn’t ready to tell anyone because she had unfortunately miscarried the baby.

“I don’t want to throw anyone that’s already being thrown under any proverbial bus, but I didn’t enjoy that moment. But what am I supposed to do? It’s like, ‘What are you going to do?’“, said the songwriter.

Well, things are really going down for Ellen DeGeneres but being the woman she is, she will indeed bounce back.