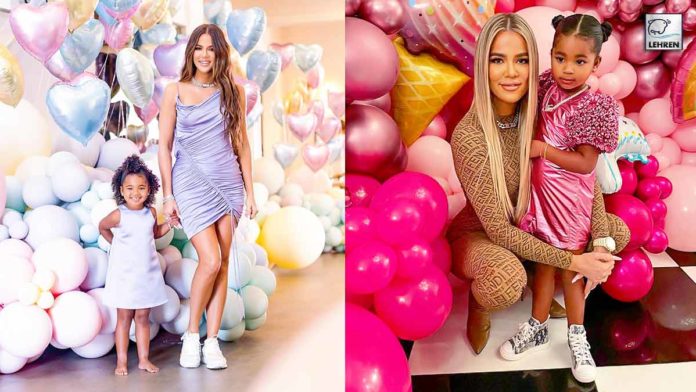 Khloé explained how her daughter, True is already following in her footsteps even though she wishes she wouldn't in one particular case.

The Keeping Up With The Kardashians star, 37, shares a daughter with sports star Tristan Thompson. However, Khloé Kardashian has recently revealed how her personality traits have influenced her 3-year-old daughter, True. The reality star answered questions in an episode of The Ellen DeGeneres Show’s ‘Mom Confessions.’

In the episode, Khloé explained how her daughter is already following in her footsteps even though she wishes she wouldn’t in one particular case. She said, “I am incredibly clean and organized. I like everything in its place, I’m very regimented. And I don’t want that for True, but she already has so much of that.” Khloé then revealed, “I feel bad that she has so much of it so young, but every toy has to be put back exactly where she got it from.”

Khloé went on saying, “I always just try to mess things up and tell her, ‘It’s OK to live in a mess! Although I’m cringing inside, I don’t want her to cringe. So she has that, and I wish she didn’t.” Further in the video, Khloé commented on how her parenting style differs from sisters Kourtney Kardashian, Kim Kardashian West, and Kylie Jenner. “I am really strict,” the Good American founder shared. “I have a schedule, I’m very militant with how I parent True, and I believe that a schedule saves everything.” “Not all of my siblings are the same,” Khloé added. “I will not tell you which ones!”

Meanwhile, earlier this month, the Keeping Up with the Kardashians star opened up about motherhood in her cover story for Cosmopolitan UK’s December/January issue, telling the magazine that people say “the craziest things” when it comes to how she raises her daughter. “I’ve learned that you can’t just post anything because people will comment and say the craziest things!” Khloé told the publication.

Khloé further said the outlet, “I’m like, ‘What are you talking about?'” she said. “I remember I posted a video of True talking. she was eating cut-up grapes and people were going, ‘Cut the grapes, she’s going to choke.'” “And I was like, ‘They’re cut!’ I’m not going to let my child choke,” Khloé continued. “People give unsolicited commentary no matter what you do. So I try and keep True stuff as clear and simple as I can for her sake.” Khloé said she doesn’t “want that energy on my child,” adding, “Leave her alone.”