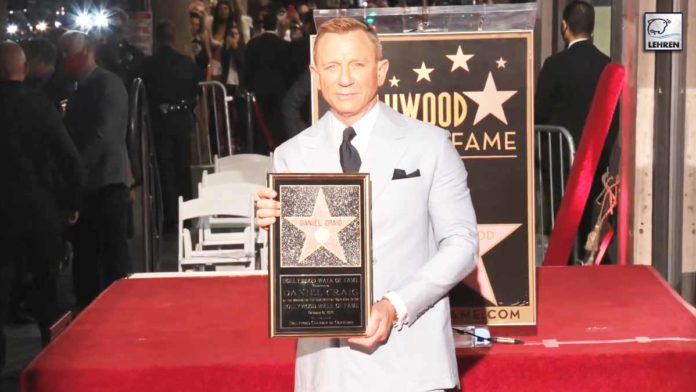 James Bond actor Daniel Craig was honored with Hollywood Walk of Fame 'Star' on Wednesday. He has played James Bond aka 007 in seven movies of the franchise.

The remarkable nighttime Walk of Fame ceremony was streamed live on the ‘Walk of Fame’ official YouTube channel on Wednesday. However, the 53-year-old actor, daniel craig is the 2704th celebrity to receive a star on the coveted Walk of Fame right next to legendary Bond actor Roger Moore. Daniel Craig’s tenure as ‘007’ came to an end with the latest film No Time to Die. Although james bond with daniel craig is a huge succession of the franchise. For unversed, daniel craig in james bond series played as 007.

The Hollywood star received the star in the company of his No Time to Die team members including Rami Malek on Wednesday night, reported Variety. Daniel took to the stage to thank the Hollywood Chamber of Commerce, along with his studio partners and his team. He also thanked the producers who cast daniel craig as james bond, Barbara Broccoli, and Michael G. Wilson. “From the depths of my heart,’ adding, ‘without you, I would not be here today,” he said while thanking the team.

“I never thought I’d hear myself say this, but you know, it’s an absolute honor to be walked all over in Hollywood. If happiness is measured by the company you keep, Hollywood legends, makes me a very happy man. Thank you very much,” Daniel Craig addressed the audience.

During the event, Rami Malek had also paid tribute to Daniel by praising him. Rami said, “If you are lucky enough to play a bad guy, you would better make sure the good guy is legendary. And this good guy is the best.” He further added that while Daniel is, “very generous with his time, he’s also a big fan of brevity, so in your honor, I promised to make this quick.”

For the special event, Daniel chose to wear a grey suit. He even posed for cameras and flaunted his star. However, no time to die release date was delayed due to Covid-19 and finally hit the theatres on September 30. No Time To Die marks the end of an era for daniel craig james bond series, who shot to superstardom in 2006’s Casino Royale and has played the iconic spy over the course of five films including Quantum of Solace, Skyfall, and Spectre.