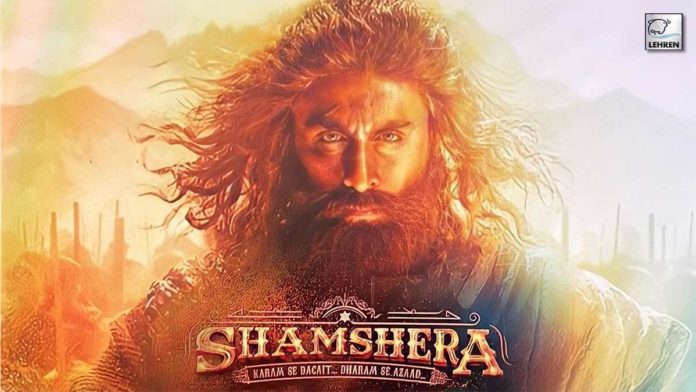 Ranbir Kapoor’s next film Shamshera poster has been leaked, take a look.

Amidst Brahmastra promotions and news, Ranbir Kapoor’s next film Shamshera poster has been leaked. Ranbir Kapoor is in the headlines for the highly-anticipated movie Brahmastra which also stars his wife Alia Bhatt and Amitabh Bachchan. Meanwhile, the first look of Ranbir Kapoor from Shamshera has been unveiled as the poster got leaked.

Looks like Ranbir is walking in the footsteps of superstar Shah Rukh Khan in order of releasing one movie in three years. And for that matter even Anushka Sharma. The actor was last seen in Sanju which was released in 2018, but the year 2022 seems to be a double treat, having two movies in the pipeline. Brahmastra is nearing its release and the Shamshera poster revealed the first look.

The makers would have definitely decided on the revelation of the first look but sources couldn’t hold much long and the poster made its way to the social media. Ranbir is looking fierce in a heavily bearded and long hair avatar. Netizens have shared their views on the rarely witnessed look of the actor, who appeared as a chocolate boy often.

A fan page of Ranbir Kapoor shared the poster with a caption: “Ranbir Kapoor in a MENACING RAW DACOIT AVATAR… Shamshera releasing July 22nd, 2022! #Shamshera #RanbirKapoor”. Following this leak, Twitter has been flooded with tweets on Shamshera and the look of the Tamasha actor.

Fans are going gaga over Ranbir Kapoor’s rugged look. A user wrote: “Leaked poster of shamshera ..Damn the intensity in his eyes.. Legend Ranbir Kapoor.” Another tweeted: “Shamshera will gonna be the Revival of Bollywood massy films #RanbirKapoor #Shamshera.” While another wrote: “A legend will rise”.