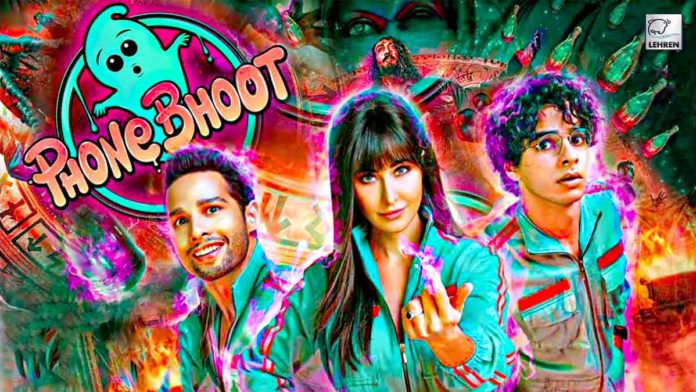 Bollywood actress Katrina Kaif announced the release date of her upcoming film Phone Bhoot with Siddhant Chaturvedi and Ishaan Khatter. Check out the poster of the upcoming horror-comedy film.

Bollywood actress Katrina Kaif has recently unveiled the poster of her upcoming film Phone Bhoot which will also star Ishaan Khatter and Gehraiyaan actor Siddhant Chaturvedi in the film. Sharing the poster the Bollywood actress also announced the release date of her horror-comedy film. Check out the details here-

Bollywood actress Katrina Kaif on Tuesday announced her upcoming horror-comedy film ‘Phone Bhoot’ with Ishaan khatter and Siddhant Chaturvedi. Sharing the update with her fans the actress shared the first poster of the film as she wrote, “#PhoneBhoot ki duniya mein aapka swagat hai. Arriving on 7th Oct, 2022 at cinemas near you.”

Sharing the poster the actress announced the release date of the film which is set to hit the theatres on 7th October this year. The poster features Katrina in a new fun avatar in which she could be seen wearing full green along with her co-actors Ishaan Khatter and Siddhant Chaturvedi. While multiple ghosts are featured in the background of the poster.

Katrina Kaif, Ishaan Khatter, and Siddhant Chaturvedi will be the second horror-comedy film this year after Kartik Aaryan’s Bhool Bhulaiyaa which went blockbuster on theatres breaching a total of 200cr business worldwide.

On the work front, Katrina was last seen opposite Akshay Kumar in the film Sooryavanshi. She also has Tiger 3 with Salman Khan and Emraan Hashmi. Farhan Akhtar’s Jee Le Zaraa and Merry Christmas in her kitty. Meanwhile, Siddhant Chaturvedi was last seen in Gehraiyaan with Deepika Padukone he also has ‘Kho Gaye Hum Kahan’. On the other hand, Ishaan Khatter will be seen with Mrunal Thakur in Pippa.