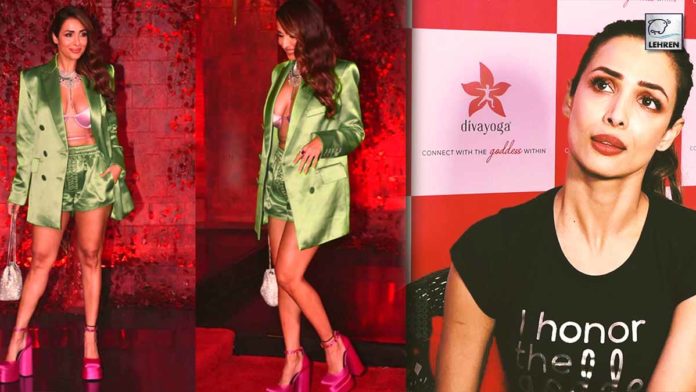 Malaika Arora is one of the popular celebrities in the Hindi entertainment industry who often gets targeted by trollers. The popular actress has again come into the radar of trolling. Malaika who is known for her stunning style and bold looks often gets trolled for the same. Recently, while attending popular Bollywood filmmaker Karan Johar’s birthday bash, the dancer went for a bold look. Well, it seems that netizens are upset about her outfit. Malaika is getting slammed by many social media users for her party look.

Last evening, Karan Johar hosted his 50th birthday party. The theme of his birthday party was all things bling and celebs from the entertainment industry were seen putting their best fashion foot forward. Actress Malaika who is often seen making bold statements with her stylish and unique fashion look wore a neon green outfit. She donned a pink satin bralette top with a neon green blazer and shorts. She completed her attire with blingy pink heels and a potli bag. On one hand, her fans were praised for her bold looks, while on the other hand, many netizens slammed her for the same.

Like every time, this time Malaika’s bold avatar was enough to grab the attention of the trollers on social media. One user commented, “Dressing sense is fully third class.” Another user wrote, “Such a tacky outfit .”One critic wrote, “Poor selection of clothes.”

Praising the actress, one fan wrote, “She is legit pulling that off “. One of the users wrote, “Meko to achhi lag ri hai yaar .”

Must Read: This OTT Platform To Release Heropanti 2, Know Details