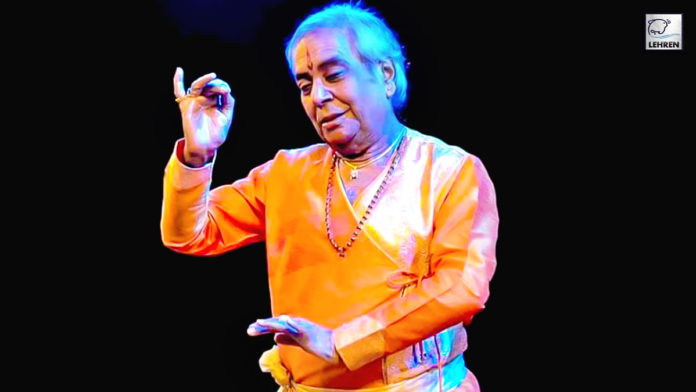 Legendary Kathak dancer Birju Maharaj, who had choreographed many iconic Bollywood songs for decades, passed away today in Delhi.

Birju Maharaj, popularly known as ‘Maharaj Ji’ by his disciples, took his last breath earlier today as confirmed by his granddaughter. The legendary dancer would’ve turned 84 next month, complained of an illness last night on Sunday. His granddaughter Ragini Maharaj revealed how they were playing Antakshari after dinner when Maharaj Ji complained of uneasiness. He was quickly taken to a hospital thereafter for early treatment. The kathak legend had been suffering from a kidney ailment and was under dialysis for treatment. His granddaughter shared the reason behind the demise was perhaps because of a cardiac arrest.

“We took him to the hospital immediately but we could not save him,” she said.

Throughout his life, the dancer had mentored many artists through his Kalashram. He firmly believed that dance is one of the ways to reach the divine source of life. “Yes, classical dance is one of the ways to connect with the divine. Hence it is called sadhana. I tell my students, to imagine that each time they strike a pose (sama), let their eyes look at Krishna, that way there is inherent bhakti (devotion) in the dance. The tatkar (footwork) practice should be like a japa (chant) where instead of ‘hare ram hare krishna’ we are saying ‘ na dhin dhin na’” he had mentioned.

Sharing about one of the most fulfilling memories of his life, he shared how once while performing in Mumbai, the dancer got so engrossed depicting the story of Krishna, and Yashoda got carried away in his emotions and alone it forgot he was on stage.

“This is an old memory, of performance in Mumbai. I was depicting the story of Yashoda and Krishna and at the end of the piece, I was so lost in emotion that I forgot my being standing on the stage, looking upon the face of Krishna. The audience was also in a reverie and even though the music had stopped, there was complete silence for many minutes. We were all lost in the experience of feeling Krishna; eventually, someone clapped and broke us out of that” he shared.

Sharing his thoughts nature and giving advice to budding dancers he said,

“An artist’s best teacher is nature. My only advice to young dancers is to watch and observe nature, which is a perfect symphony. Watch a tree and its branches; watch the winds whistle, the clouds rumble, the lightning dance through the skies. Why do you need to go anywhere, when nature is here?”

The Kathak exponent had schooled many classical Bollywood songs and had worked with many talented Bollywood celebrities but in his own words, his favorite of them all, was Madhuri Dixit. He has worked with the actress in many films like “Dil toh pagal hai”, Dedh Ishqiya and Devdas. Even Deepika Padukone was fortunate enough to work under his guidance for “Bajirao Mastani”.

Kamal Hassan, who shares a decade-long relationship with the dancer, took to his twitter to express his grief. Maharaj ji had choreographed him for his hit movie “Viswaroopam’”.

“Pandit Birju Maharaj was an unparalleled dancer and he has passed away. I learned a lot from him as his student by watching him from a distance like Ekalavya and also by working with him closely during “Vishwaroopam”. He dedicated his whole life to music and dance” he tweeted.