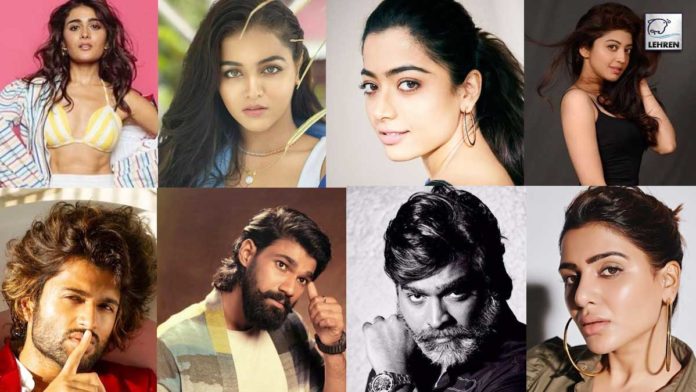 Regional cinema across India is known to churn out some of the best films and some of the best talent Indian cinema has had over the decades. The trend of actors doing crossovers into other languages has picked up great momentum in past years, including Hindi film actors doing regional language films and vice versa. In the recent time and coming months, there’s a plethora of talent from across language cinemas that recently have or will be making their debut in Hindi films and shows.

Shalini Pandey after impressing with her innocence and amazing performance in Arjun Reddy starring opposite Vijay Deverakonda is now all geared up to make her debut in Bollywood with the electrifying actor Ranveer Singh in the upcoming movie Jayeshbhai Jordaar which is produced by Maneesh Sharma of YRF Production and it’s being directed by Divyang Thakkar.

Wamiqa Gabbi after garnering appreciation and love in Tamil, Telugu, Kannada, Malayalam, and Punjabi films has taken Bollywood by storm with her OTT debut series Grahan. Wamiqa is lauded for her brilliant performance without losing the serenity and innocence of her character in the series. As per the industry sources, Wamiqa is set to play young Sivagami in the magnum opus and the third installment by Rajamouli Baahubali: Before the Beginning. It was also reported that she replaced Mrunal Thakur to play the lead part. Her next will be a series, Mai, with Sakshi Tanwar on Netflix.

Another south-leading actress is set to storm Bollywood with multiple projects in the pipeline. Rashmika has been part of several Telugu and Kannada blockbuster movies working with some of the top actors from the region and is now paired opposite Siddharth Malhotra in Mission Majnu produced by RSVP and directed by Shantanu Bagchi. The buzz is also there in the industry, she is going to be part of Good-Bye co-starring megastar Amitabh Bachchan is produced by Balaji Telefilms and directed by Vikas Bahl.

Pranitha predominantly appeared in Kannada, Telugu, and Tamil language films and is now set to make her Bollywood debut soon with two prominent films. She will be seen sharing screen space with a stellar cast including Ajay Devgan, Sanjay Dutt, Sonakshi Sinha, Ammy Virk amongst many others in the war film Bhuj: The Pride of India is set to release soon on Disney+ Hotstar. The southern actress simultaneously will be seen in another rom-com film Hungama 2 with Meezan Jaffrey, Shilpa Shetty, and Paresh Rawal in pivotal roles which are directed by Priyadarshan marking his return to the Hindi film industry.

The original Kabir Singh aka Arjun Reddy aka Vijay Devarakonda after predominantly working in Telugu cinema as an actor and producer are now set to make his debut in Bollywood in the romantic sports action film Liger opposite Ananya Pandey. The young heartthrob will be seen playing like a boxer for which he has tremendously worked to have an athletic body. Coincidentally it also marks Ananya’s debut in Telugu, Tamil, Kannada, and Malayalam cinema. The film is produced by Karan Johar.

Bellamkonda Sai Sreenivas after gaining massive success in Telugu films, son of producer Bellamkonda Suresh is now looking forward to his big-ticket in Bollywood with the remake of S S Rajamouli’s 2005 movie Chhatrapati. The Hindi version will be directed by filmmaker V V Vinayak and produced by Jayantilal Gada’s Pen Studios. The Telugu version starred Prabhas as the Chhatrapati.

One of the finest actors in current times from the south film industry including Tamil, Telugu, and Malayalam, actor, producer, lyricist, dialogue writer Vijay Sethupathi is all set to mark his Bollywood debut with the film Mumbaikar alongside Vikrant Massey, Sanjay Mishra, Ranvir Shorey, Sachin Khedekar, and Tanya Maniktala amongst others. Referred to by fans and media as “Makkal Selvan”, meaning “People’s Treasure” it will be a treat to see the superstar mouthing Hindi dialogues in his unique style. The film Mumbaikar is the remake of 2017 Lokesh Kanagaraj’s Maanagaram and is helmed by Riya Shibu and directed by Santosh Sivan.

She is one of the finest actors’ down south Samantha Akkineni made a very impressive debut this year with the series Family Man 2 alongside Manoj Bajpayee on Amazon Prime Video. She was praised both by the critics and by the audience for playing the role of an antagonist. Samantha who already established her career in the Telugu and Tamil film industries is looking for a good script to make her Hindi film debut.

Amar Choudary is popularly known as Jiiva is an actor and producer in several super hit films in Tamil cinema. After establishing himself as one of the successful actors down south Jiiva is all set to make his Bollywood debut with the much-awaited magnum opus film 83. Jiiva will be seen portraying the character of real-life cricketing hero Kris Srikkanth onscreen. 83 is a biographical sports film based on the real-life sporting event when India won the cricket World Cup in 1983 under the captaincy of the legendary Kapil Dev. The film is directed by Kabir Khan, produced by Deepika Padukone and Sajid Nadiadwala. Ranveer Singh is playing Kapil Dev.