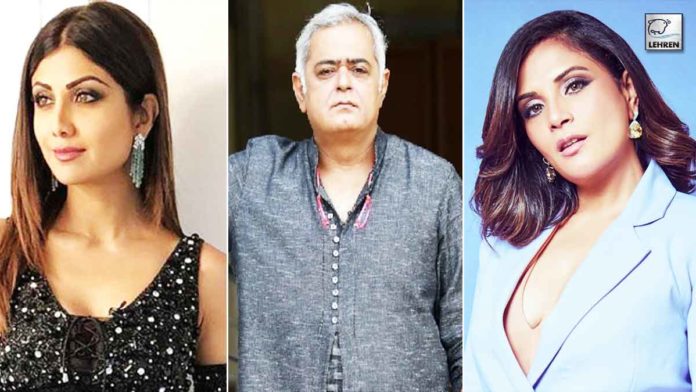 Check out the list of Bollywood celebs who have come out in public to support Shilpa Shetty amid Raj Kundra's pornography case.

The entire nation’s eyes are currently on Shilpa Shetty after her husband Raj Kundra was arrested in a pornography case. People are curious to know if Shilpa Shetty was involved in the case. And if not, what is her take on the whole controversy.

The whole Bollywood industry has chosen to remain silent as if nothing has happened. There are only a handful number of people who have spoken about the case. And those who have supported Shilpa Shetty can be counted on fingers.

Check out the list of people who have come out in public to support Shilpa Shetty:

The first one to support Shilpa was her sister Shamita Shetty. Since she is family and shares a very close bond with Shilpa, it was obvious that Shamita would stand firm beside Shilpa in tough times. On the day of the release of Shilpa Shetty’s film Hungama 2, Shamita wrote on social media, “You’ve gone through a lot of ups n downs in life & one thing I know for sure..you’ve emerged stronger!… this too shall pass my darling.”

Renowned filmmaker Hansal Mehta gave full support to Shilpa Shetty and also slammed people who are trolling her. He also targeted the industry for keeping mum all this while. In a series of tweets, he wrote, “If you cannot stand up for her at least leave Shilpa Shetty alone and let the law decide? Allow her some dignity and privacy. It is unfortunate that people in public life ultimately are left to fend for themselves and are proclaimed guilty even before justice is meted out.”

“This silence is a pattern. In good times everybody parties together. In bad times there is deafening silence. There is isolation. No matter what the ultimate truth the damage is already done,” he further added.

Actor Richa Chadha immediately came in support of Hansal Mehta’s statement and tweeted, “We’ve made a national sport out of blaming women for the mistakes of the men in their lives. Glad she’s suing.”

Actor Trimala Adhikari, who is known for her role in ‘Haraamkhor’ alongside Nawazuddin Siddiqui also supported Shilpa Shetty. In an exclusive interview with us, she said, “I understand that they are husband and wife but sometimes you don’t know what your partner is up to. And bad things happen in every industry. Its just that the actors are in the public domain, everybody knows their faces, they become an easy target. Their life is so hard. They are always being targeted. I cannot have a life like this. It is very stressful. You can’t even sleep. They are strong human beings and we should learn from them to be strong. If Shilpa Shetty has not done anything, people should not make a judgement that she is a bad woman. Let the court decide. Let Shilpa live in peace. She has kids also. Be a little human.”

Dancer and actor Rakhi Sawant also extended her support towards Shilpa Shetty. She says that she is a very hardworking person and there is a conspiracy to defame her.

Talking about Shilpa, she said, “I know her personally. Her name is being dragged excessively. I understand that they both are husband and wife but they have separate careers. We all know that Shilpa has worked too hard in the film industry and now her image is being tarnished. We should keep her away from all this.”

On the other hand, Shilpa Shetty has finally broken her silence on the entire controversy. She took to her Instagram and issued a statement. Read Here.