Vikrant Rona: Kiccha Sudeep Opens Up On His Bond With Salman Khan 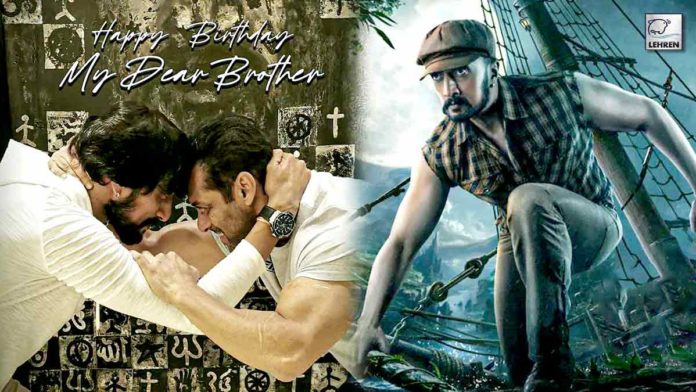 Kiccha Sudeep opens about his friendship and bonding with Bollywood actor Salman Khan at the trailer launch of the film 'Vikrant Rona'.

VikrantRona: The much-anticipated Kannada film ‘Vikrant Rona’ starring Kiccha Sudeep and Jacqueline Fernandez on Thursday was spotted on the trailer launch the film in Mumbai. The film has created much buzz among the audience, earlier actor Kiccha Sudeep announced that Salman Khan’s SKF will present the Hindi version of Vikrant Rona. While during the trailer launch event of the film the actor opened up about his bond with Salman Khan.

During the trailer launch of ‘Vikrant Rona’, Kannada actor Kiccha Sudeep opened up about his bond with actor Salman Khan, and Salman presenting his film Vikrant Rona in North India under Salman Khan Films. He said, “I totally believe that my relationship with him is nothing to give and take policies, Dabangg was my gesture towards his film this is his gesture towards my film and Salman Khan sir is a person and human I know he’s very ok to come and do a song or a cameo or anything of that sort but SKF is very close to his heart so I don’t think he will associate with our film unless and until he is quite confident about the content but it was much much later that we actually during Dabangg we were just in the initial discussion stages also so its much later that he saw the clippings and everything and then he threw up on the idea and said, “is there anything I can do” its a huge line coming from him and of course I smiled and I said ‘of course’. And what better than since we were not expecting anything else, we have done our hard work. From a brother to brother he came in as a presenter and then today he is taking a lot of initiatives and he wanted to be here even in Bangalore and then today at Mumbai but then because of the protocol issues he is no, that is a very huge elephant strength we have got on the first title. So I think that’s the bonding I have and he has always been welcoming me every time I think, both of us have been unconditional to that”.

Vikrant Rona stars Kichcha Sudeepa in the lead, along with Jacqueline Fernandez, Nirup Bhandari, and Neetha Ashok. The pan-world 3D film will release in five languages – Kannada, Tamil, Telugu, Malayalam, and Hindi and is also expected to release in Arabic, German, Russian, Mandarin, English, and others. The film is being directed by Anup Bhandari and produced by Jack Manjunath under his production Shalini Arts, and co-produced by Alankar Pandian of Invenio Origins. Vikrant Rona releases in theatres on July 28.