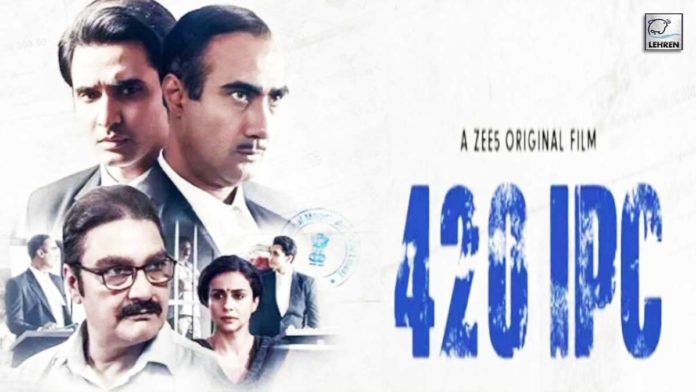 It’s a welcome break from rapes, murders and gender clashes.

Life gets ruffled for simple chartered accountant Bansi Keswani (Vinay Pathak) and wife Pooja (Gul Panag) when Sandesh Bhonsle, the Deputy Director of MMRDA, is arrested for high-level corruption running into thousands of crores. Keswani who’s the CA for Bhonsle’s wife and kids is raided by the CBI. Finding nothing during the search, Keswani who is bankrupt and on the verge of being evicted from his house, is let off.

A few months down the line, another of Keswani’s clients, builder Neeraj Jain (Arif Zakaria) finds three cheques missing from his drawer.

Writer-director Manish Gupta comes up with a crisp courtroom clash when rookie defence counsel Birbal Choudhary (Rohan Vinod Mehra) is pitted opposite veteran public prosecutor Savak Jamshedji (Ranvir Shorey). In the dock is Bansi Keswani, charged with the theft of the cheques and for forgery of Neeraj’s signature.

It’s tough writing an interesting story based only on an economic offence. But Manish Gupta pulls off an engrossing drama that’s narrated, performed and edited (editor: Archit Rastogi) with competence.

Smoothly flowing into unexpected waters, Birbal who investigates the case more like a cop than an attorney, clears his client of the charge. Which may sound like a formulaic David vs Goliath plot but rest assured that this is no routine fare.

Ranvir Shorey gives Jamshedji a touch of Parsee Hindi-English while Rohan Mehra makes a likeable Birbal. Gul Panag who has little to do as Pooja, Arif Zakaria and Sanjay Gurbaxani (as Judge Rustom Mistry) are all well cast.

Earlier, Manish Gupta had written (not directed) the Akshaye Khanna starrer, Article 375, a watchable and different legal take on a gender issue.

This time around, his courtroom outing that doesn’t meander unnecessarily, makes you feel like saying, “Your Honor, I like this case.”