Madonna Unveils Her Favorite Looks During The At-Home Fashion Show 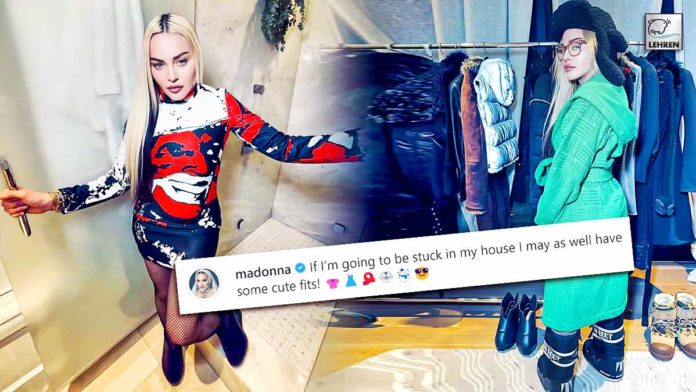 Madonna shared a series of photos as she showed her fans what she will do if she got stuck in her mansion.

Madonna has recently shared what she will do if she got stuck in her house. And she proved that she will always do something creative and productive as she shared a carousel of new photos on her Instagram. The photos were taken in different parts of her mansion as she modeled several outfits for her 17.3 million followers.

The music legend wrote in her caption, “If I’m going to be stuck in my house I may as well have some cute fits!” Madonna’s first photo featured her in a white skull cap as she propped her hands on the lower half of her fully made-up face. She sported a white blouse with a pronounced collar, buttons, and a green patch. The next image showed the entertainer in a green terrycloth robe that she wore with a flappy black winter hat.

As the post continued, the music artist wowed in a knit bucket hat made of multiple shades of blue yarn. The colors brought out her blue-hued eyes, which were framed by strokes of dark mascara. Streaming out from under the headgear were long, sleeky straight strands of her blond hair. Under the light-colored locks were deep brunette stresses that stood in stark contrast.

The mom-of-six moved things right along, taking to her bathroom for another photo. The Papa Don’t Preach hitmaker posed in a long-sleeve dress that had a black, red, and white graphic print throughout. She stood at the door of her shower, holding it open with one hand and placing her other hand on the wall. The award-winning musician was in black fishnet tights and chunky black platforms. Behind her eucalyptus plants could be seen hanging from the showerhead.

Madonna switched things up, going into her bedroom to share yet another outfit change. The trendsetter slipped into a beige sweater dress with eyelet slits going down the sides. She wore black fishnets once again and rounded out the look with chunky black platform shoes. The icon lay on her stomach at the foot of her bed, stretching her body over a cream-colored bedroom bench.

However, for the last two snaps, Moadonna donned full-body fishnets along with her black snow boots again. She also wore the flappy winter hat as she squatted down against a white wall in her home. The performer wore multiple gold bangles on her wrist and she smirked at the camera as she rested her chin in her fist. In the last picture, she kept on the fishnet outfit and leaned on her bed, which had white linen and the letter M monogrammed into two pillows with crowns over each of the letters.