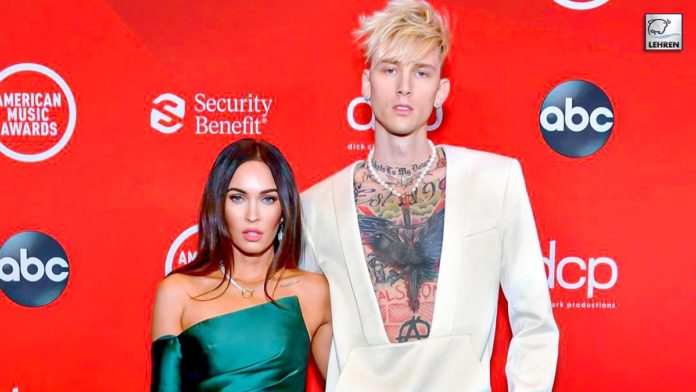 The singer and actor Machine Gun Kelly recently shared the sweet details about how he and girlfriend Megan Fox first connected. During a recent appearance on The Drew Barrymore Show, Machine Gun Kelly (real name is Colson Baker) explained how they met as co-stars on the film Midnight in the Switchgrass, directed by Randall Emmett in 2020.

The 31-year-old rapper admitted to the host Drew Barrymore, “We were filming a movie and the only reason I took the movie is cause they were like, ‘There are scenes with Megan Fox,’ I was like, I’ll take the movie.” While shooting, Kelly admitted that he hung around outside the actress’ trailer waiting for something to happen.

However, Fox eventually invited him into her trailer for lunch, and although the Bloody Valentine singer pretended to be surprised, he said he knew it was going to happen because his ‘gut is always right.’ “I went in there and she said, ‘How do you feel?’ and I said, ‘I’m lost,’ and she said, ‘Let’s find you,'” Kelly gushed as he clutched his heart and gasped in admiration. “It killed me, she was Cupid.” “You got hit by her arrow,” Barrymore added.

ALSO READ – Machine Gun Kelly Opens Up About His Mental Health: ‘It’s Ok To Not Be Ok’

The conversation took place as the tattooed musician gave the talk-show host a wild green manicure to promote his new nail polish brand, UN/DN LAQR. Previously, Megan Fox, 35, also shared a similar story about that spark-filled lunch with Kelly when she appeared on the Give Them Lala…With Randall’s podcast, just weeks after she confirmed the relationship last summer.

The Transformers actress admitted to hosts Emmett and his then-fiancée, Lala Kent, that during that meal she asked ‘900,000 questions’ and ‘went deep right away.’ “The second that I was in a room with him and said hello to him and looked into his eyes, I knew right away that he was what I call a twin flame,” said Fox, who had recently split from husband Brian Austin Green. “We’re actually two halves of the same soul I think. I said that to him almost immediately. I felt it right away.”