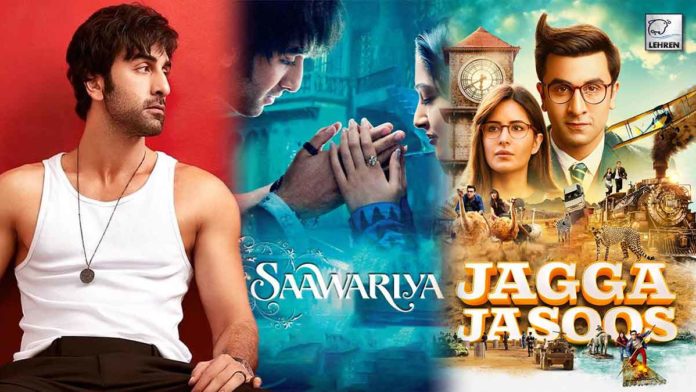 Here's a list of Ranbir Kapoor movies that fell flat at the box office while failing to impress the fans and audiences. Take a look-

Bollywood actor Ranbir Kapoor is one of the much-loved and popular superstar of the current generation. The actor made his debut in the Bollywood industry with Sanjay Leela Bhansali’s film Saawariya in 2007 along with Sonam Kapoor.

Despite delivering several hit movies like Yeh Jawaani Hai Deewani, Barfi, and Ae Dil Hai Mushkil among others the flop movies of the actor have outnumbered his hit films. Here’s a list of Ranbir Kapoor movies that fell flat at the box office while failing to impress the fans and audiences. Take a look-

The Sanjay Leela Bhansali film Saawariya starred Ranbir Kapoor along with Neerja actress Sonam Kapoor. The film marked the debut of both Sonam Kapoor and Ranbir Kapoor and the film was released alongside Deepika Padukone and Shah Rukh Khan starrer film Om Shanti Om The film failed to impress its audience and miserably fell at the box office while making a total of 39.22 cr. worldwide.

Another film that topped our charts is Shimit Amin’s directorial Rocket Singh which became another disaster in Ranbir Kapoor’s career. The film starred Ranbir along with actress Shazahn Padamsee. The story of the film was based on a man named Harpreet, who becomes a salesman after graduation. While, after being ridiculed by his colleagues and his employer, he plans to operate a parallel company without their knowledge. The film also became a flop earning a total of 27.67 cr. worldwide.

2015 released Bombay Velvet is Anurag Kashyap’s film starring Ranbir with actress Anushka Sharma. The movie made quite some buzz however it failed to fulfill the expectations of the audience. The film was made on a whopping budget of about 120 cr. however, the film failed to even recover the making cost of the film after grossing a total of 43.1 crores.

Another mistake in the actor’s career remained in 2017 released Anurag Basu’s film Jagga Jasoos which starred Ranbir with her ex-girlfriend Katrina Kaif. Meanwhile, even though Katrina Kaif and Ranbir Kapoor’s film was a flop, its songs were smashing hits, and their fans loved their camaraderie in the movie. The film grossed a total of 83 crores.

The latest film to join the list is Ranbir Kapoor’s recently released film Shamshera, the Karan Malhotra’s directorial was highly anticipated among the audience as the film came as a comeback of Ranbir after his marriage with Alia Bhatt. However, the film failed to stand against the expectations of its viewers. The film was released on 22 July 2022. By now the film has barely managed to cross Rs 48 crore. Failing to even cross the 50cr mark the film became the 7th major flop in the actor’s career.

Meanwhile, Ranbir Kapoor will soon be seen in Ayan Mukerji’s film Brahmastra with his wife and actress Alia Bhatt, apart from this he also has Animal with Rashmika Mandanna, Luv Ranjan’s untitled film with Shraddha Kapoor, Ramayana with Hrithik Roshan, while he is also expected to make a cameo in Vicky Kaushal’s film ‘Govinda Naam Mera’.