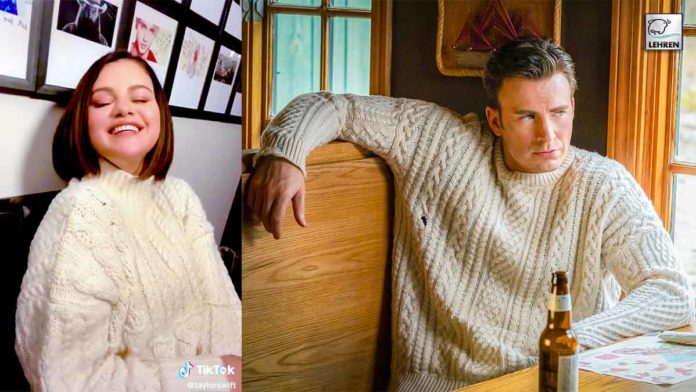 Fans spotted Selena wearing a chunky sweater that looked suspiciously like the one Chris Evans went viral wearing in his film Knives Out.

Selena Gomez fans are once again found evidence to prove that she is in a relationship with Chris Evans. Selenators convinced a sweater she wore over the weekend was not merely a sweater but, is instead, a clue she’s really dating Chris Evans.

The 29-year-old singer was seen on friend Taylor Swift’s TikTok wearing a chunky cream-colored chain knit sweater that fans were sure was a definite nod to Evans’ infamous Knives Out character. This is adding fuel to speculation that the stars are secretly dating after social media users were previously convinced they had unearthed proof that the couple was a romantic item.

Recently, Taylor Swift revealed that her ‘bestie’ Selena Gomez joined her for support backstage at Saturday Night Live. The 31-year-old Grammy winner shared a TikTok video while behind the scenes at 30 Rock showing Gomez sitting next to her on the couch. Selena smiled adorably to the camera while wearing a chunky sweater that looked suspiciously like the one Chris Evans went viral wearing in his film Knives Out.

Although, the sweaters weren’t identical as Chris’ had a slightly different knit pattern and was distressed, yet fans took the sartorial choice as a nod that Gomez and Evans are a thing. Selenators were quick to point out the similarity in sweater choices by sharing side-by-side images of Gomez and Evans from the 2019 film. Some even suggested that the rumored couple is ‘sharing clothes’, though, it’s clear the pieces weren’t the same.

The rumors first began to fuel the internet that the actress, 29, and the Avengers star were an item after fans noticed that Chris followed Selena on Instagram. Though some social media users claimed that the two were following each other, Gomez does not follow his account. Meanwhile, later TikTok users were convinced they spotted Selena in a video of Chris playing the piano.

However, the Wizards of Waverly Place actress had previously expressed a romantic interest in the Knives Out star. During a 2015 appearance on Watch What Happens Live With Andy Cohen, Selena replied to a fan’s question about who was her number one Hollywood crush. “I kind of have a crush on Chris Evans,” she said. “Isn’t he cute? He’s very cute,” she added.