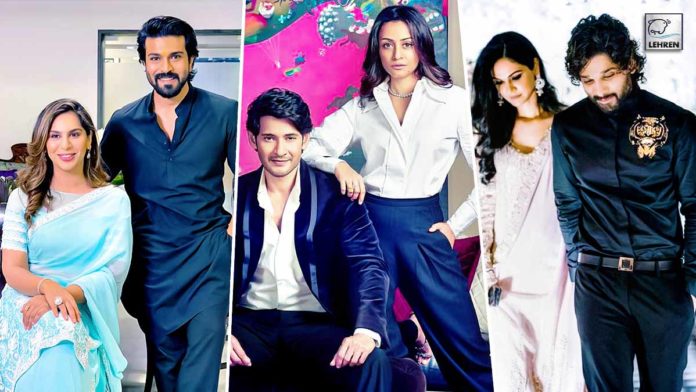 Take a look at the top 5 actors of the South industry who have got married to some very beautiful non-celebrity wives, check out here-

Many actors like Jr. Ntr, Ram Charan, and Allu Arjun among various others are now getting global recognition for their films. While these big names of the industry have got married to some non-celebrity beauties and divas, so without further ado let’s take a look at the top 5 actors of the South industry who have got married to some very beautiful non-celebrity wives, check out here-

Sneha Reddy is the daughter of the renowned politician Kanchrla Chandrashekhar Reddy, Chairman of the Science Institute of Technology. Sneha Reddy got married to South superstar Allu Arjun on 6 Mar 2011. The couple is now the parents of their son Ally Ayan and a daughter Allu Arha.

South superstar and RRR actor Ram Charan is married to Upasana Kamineni. According to the reports, Ram Charan and Upasana were friends in school. The duo got engaged in December 2011 and tied the knot on 14 June 2012 in Hyderabad. Upasana Kamineni is an entrepreneur. She is the vice-chairman of Apollo Charity and Chief Editor of B Positive magazine. She is the daughter of Shobana Kamineni, the executive vice-chairperson of Apollo Hospitals. Prathap C. Reddy, the founder of Apollo Hospitals is the grandfather of Ram Charan’s wife.

SSMB 28 actor Mahesh Babu is yet another superstar of the South industry the actor is married to actress, model, and Femina Miss India, Namrata Shirodkar. Talking about their first meeting Namrata once said, “Mahesh and I met on the sets of a film called Vamsi. It’s the only film that I did with him and it’s the worst film in both our careers. But we will be ever grateful to Vamsi. That’s where we met. I immediately knew this was the man I wanted to spend the rest of my life with.”

Baahubali actor Rana Daggubati is married to Miheeka Bajaj, the couple tied the knots in the year 2020, August 8. The couple opted for a traditional ceremony at Ramanaidu Studios in Hyderabad. Miheeka Bajaj is a Businesswoman. She is born and brought up in Hyderabad by parents Bunty and Suresh Bajaj.

RRR actor Jr NTR is yet another lucky actor who got married to a gorgeous non-celebrity wife. NTR is the son of a famous actor and former Andra Pradesh Chief Minister N.T. Rama Rao. The star kid gave many successful films and got married to Lakshmi Pranathi, the daughter of businessman Narne Srinivas.