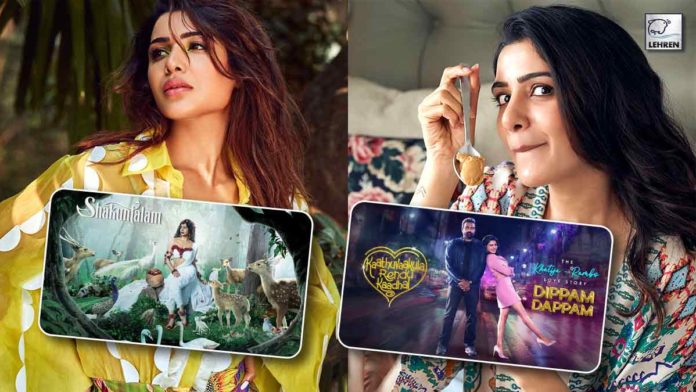 Samantha Ruth Prabhu is celebrating her 35th birthday. Let's take a look at her best performances and upcoming movies.

Renowned actress Samantha Prabhu is celebrating her 35th birthday on 28 April. On her special day, let’s take a look down the lane with some of her best performances and her upcoming projects this year. Samantha made her debut in the film industry with the Telugu flick Ye Maaya Chesave opposite her ex-husband Naga Chaitanya.

She also got married to Naga Chaitanya in a fairytale wedding amid a lot of fanfare. But things didn’t work out and the couple decided to end it mutually. While her film got acclaimed for its successful performance in the theatres. The actress later won the Filmfare Award South for Best Debut Actress.

The actress later showed her impeccable performance in films like-

1. Makkhi (Eega): In this SS Rajamouli film, Samantha plays the role of Bindhu in the project. The plot revolves around Bindhu her love interest Nani, and Kiccha Sudeep.

2. Jaanu: The story revolves around how Ram and Jaanu recall the old days and resolve their issues. With an incomplete teenage romance, a school reunion, and a heartbreaking blast from the past, Ram and Jaanu try to tie the loose ends of their love story.

3. Majili: The story revolves around a failed cricketer unable to get over his ex-girlfriend marries a girl who has been madly in love with him. However, things change with a blast from the past.
4. Family Man 2: The actress showed her versatility through her performance in the amazon prime series “Family Man 2”. Samantha embodied all the shades of her character perfectly and delivered a terrific performance. She was also excellent in the action scenes. The actress made her OTT debut with the series as she played the role of Raji, an unwavering Sri Lankan Tamil liberation fighter who is on a suicide mission.

Samantha will next be seen in a multi-starrer Tamil rom-com film titled Kaathuvaakula Rendu Kaadhal. It is directed, written, and produced by Vignesh Shivan. Reportedly, It is on the final leg of the shooting and the team has already commenced the post-production of the film. Vignesh co-produced the film with Nayanthara and S.S. Lalit Kumar under Rowdy Pictures and Seven Screen Studios. She will be seen starring alongside Nayanthara, Vijay Sethupathi, & Prabhu. It is slated to hit the theatres on 28 April 2022 in two languages Tamil and its dubbed version Telugu. The Telugu title for the film is Kanmani Rambo Khatija.

Yashoda is touted to be a new age sci-fi thriller film, in which Samantha will be seen playing the titular character Yashoda. It is written and helmed by the duo Hari Shankar & Harish Narayan. Makers in Dec 2021 announced that they had started shooting the film, by launching a title poster. Though the release date is yet to be announced by the makers, it is being said the film will see the pan India release in 5 Indian languages Telugu along with its dubbed version Tami, Malayalam, Kannada, and Hindi. Other actors Unni Mukundan, Murali Sharma, Varalaxmi Sarathkumar, and Sampath Raj play significant roles. Financed by Sivalenka Krishna Prasad.

3. Shakuntalam:
She will next be seen in a big-budget mythological drama titled Shaakuntalam based on the epic Shakuntala written by India’s greatest poet Kalidasa. Written and helmed by Gunasekhar. Samantha will be essaying the titular role of Shakuntala.

Samantha will next be sharing screen space in the 11th film of the Vijay Deverakonda, it will be directed by Shiva Nirvana under the banner Mythri Movie Makers. It is an upcoming Telugu film yet to be titled, tentatively being called VD11, the filming will start soon in Kashmir.