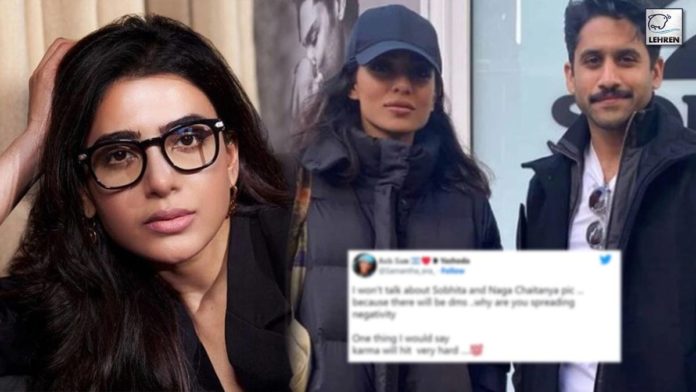 A picture of rumored couple Naga Chaitanya and Sobhita Dhulipala is now going viral on the internet in which the two were seen posing together.

Recently a picture of Laal Singh Chaddha actor Naga Chaitanya and Ponniyin Selvan actress Sobhita Dhulipala went viral on the internet, in which both the actors were seen posing for the camera. Reacting to their picture a segment of Samantha Ruth Prabhu’s fans have slammed the fan club and PR teams of the actors.

A user commented, “Where were you when Sam was trolled so badly few months back and his fans said that it’s Samantha and her PR team who spread fake rumours about Naga Chaitanya and Sobhita.” another user commented, “I won’t talk about Sobhita and Naga Chaitanya pic… because there will be DMs… why are you spreading negativity. One thing I would say karma will hit very hard.”

For the unversed, Naga Chaitanya and Sobhita Dhulipala earlier grabbed a lot of attention after it was rumored that the two have started to date each other. Following the rumors, many reports and fans of the actors claimed that the rumors are being generated by Chaitanya’s ex-wife, Samantha Ruth Prabhu’s PR team.

However, Samantha gave it back to the trolls and tweeted, “Rumours on girl – Must be true !! Rumours on boy – Planted by girl !! Grow up guys .. Parties involved have clearly moved on .. you should move on too !! Concentrate on your work … on your families .. move on!!”

Earlier a Pinkvilla report indicated that Naga Chaitanya was spotted multiple times at the same hotel where Sobhita was staying during the promotions of her film Major opposite Adivi Sesh. The report also mentioned that Sobhita had recently celebrated her 30th birthday on May 31 in Hyderabad in the company of her ‘close buddies’ that included Naga Chaitanya. The report cited, “Chay and Sobhita seemed very comfortable in each other’s company as they spent time at the actor’s new house. Naga Chaitanya was giving her a tour of his massive home. After a few hours, they left together in the same car”.