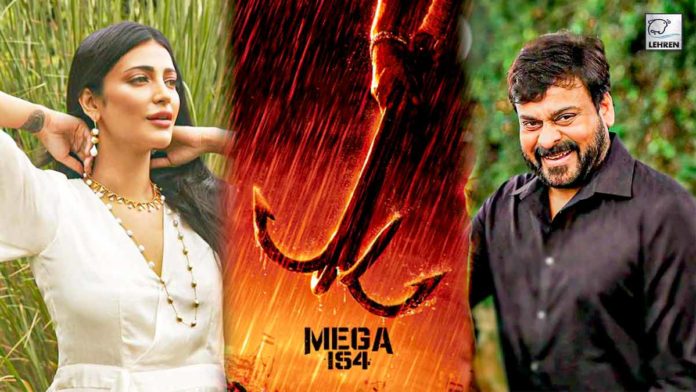 Chiranjeevi books Sakranthi slot of 2023 for his upcoming mass entertainer film 'Mega154'. The film will star Chiranjeevi with Shruti Haasan in the lead.

South film industry megastar Chiranjeevi is geared up for his upcoming film ‘Mega 154’ as now the makers have announced that the much-anticipated film will be released on Sankranthi 2023. The film will also star Kamal Haasan’s daughter Shruti Haasan in the film.

Film director KS Ravindra aka Bobby took to his social media handle to announce the film’s release date with a poster. Making the announcement he wrote, “This time its going to be a MEGA festival! Make way for MASS MOOLA VIRAT for this Sankranthi 2023. Can’t hold my eagerness to witness the MASS Euphoria of MY HERO @KChiruTweets garu on the big screens with my film #Mega154.”

As per reports, Mega154, as of now, has completed 40% of its shoot. The film’s next schedule will begin next month. The movie’s producers are Naveen Yerneni, Y Ravi Shankar, and GK Mohan, with Mohan serving as a co-producer. A top-notch technical team is working on the project with a number of well-known actors.

Recently, the South actor grabbed headlines for giving his voice in Ranbir Kapoor and Alia Bhatt starrer film ‘Brahmastra’. Sharing a post on social media filmmaker Ayan Mukerji shared a long note on his Instagram and wrote, ““I have met Chiranjeevi Garu on just two occasions – once with Ranbir when we asked him to lend his voice for Brahmāstra in Telugu……..To be in the Dub Studio with him, and to listen to his voice on our Trailer – will be one of my favourite memories on Brahmāstra!”.

Meanwhile, the South megastar was recently spotted along with Naga Chaitanya, Rana Daggubati, Adivi Sesh, Nagarjuna, and many other celebrities from the Telugu and Tamil film industry at the wedding ceremony of late distributer and producer Narayan Das Narang’s granddaughter, Jahnvi Narang on Thursday in Hyderabad.

On the work front, Chiranjeevi was last seen in Acharya, he will soon be seen in Bhola Shankar with Keerthi Suresh and Tamannaah Bhatia, he also has God Father with Nayanthara and Satyadev the film will also mark Salman Khan’s cameo.