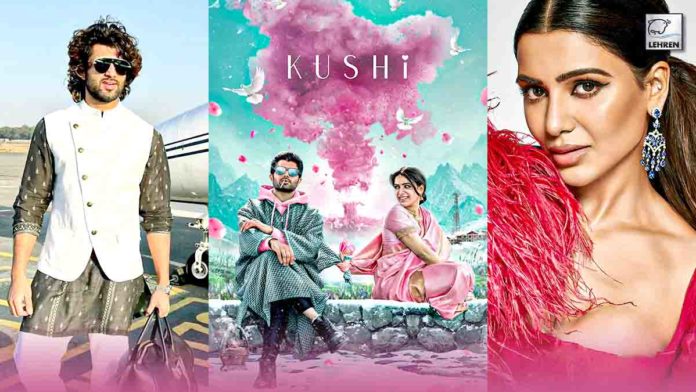 Actress Samantha Ruth Prabhu recently took to her social media account to share her upcoming film poster. The actress unveiled the poster of the film and wrote “This Christmas- NewYears. An Explosion of Joy, laughter, happiness & Love. A Grand Family experience!”. Along with the poster, she also revealed the release date, “#KUSHI Telugu Tamil Kannada Malayalam Dec 23 Worldwide Release!”.

In the poster, the actress could be seen wearing a pink cute pink saree, while the actor Vijay Deverakonda is featured in a dashing pink sweatshirt and black pants layered with a grey pheran and the couple is tied with a knot.

Actor Vijay Deverakonda also shared the poster and wrote, “An Epic Romantic comedy in the making 🙂 This one is for all of you and your families #Kushi“. While the name of the film has also been changed as earlier it was VD11.

Earlier the team shared pictures of the movie’s launch and shared the news that the movie goes on the floor this month. In the pictures, Vijay was seen posing with the crew of the movie holding a clapboard in his hand. “#VD11 Launched Our Heartthrob @TheDeverakonda & Queen @Samanthaprabhu2 reunite for a Family Entertainer under the direction of @ShivaNirvana Music by @HeshamAWMusic Shoot begins this month! #VD11Launch.”

The actress was last seen in the Hindi web series, ‘The Family Man 2’. Soon after which, she was spotted delivering a sizzling performance in Pushpa’s song Oo Antava. Now she’s gearing up for the release of Vignesh Shivan’s upcoming venture Kaathu Vaakula Rendu Kaadhal on April 28 alongside Vijay Sethupathi and Nayanthara. The actress also has Shaakuntalam, which is directed by Gunasekhar for the release. She is also shooting for a pan-Indian film titled Yashoda with directors Hari and Harish.

Meanwhile, Vijay Deverakonda will be seen making his Bollywood debut with Liger this year. The actor stars opposite Ananya Panday in the movie. Backed by Karan Johar and Charmee Kaur, the film is directed by Puri Jagannadh. Also, his movie Liger will hit the screens this year.