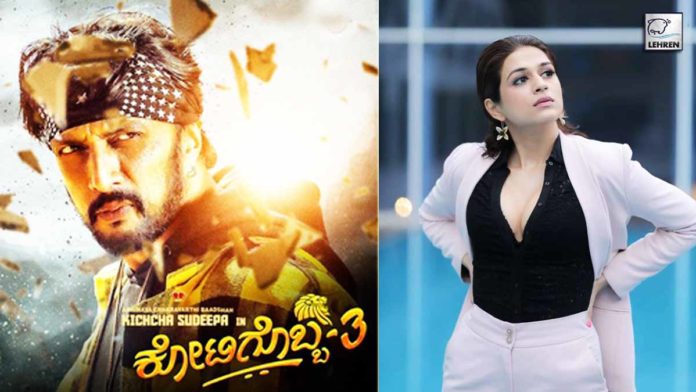 Shraddha Das is acting in a leading role in the Kichcha Sudeep starrer Kotigobba 3 that is releasing this Dusshera and it has sent the industry in a frenzy.

The much anticipated Kotigobba 3 will be releasing this 14th October. The film is releasing in Kannada and Telugu. The movie took about 2 years in the making and the release got delayed because of the Covid situation. But it’s releasing now and we are gearing up to see our favorite girl Shraddha Das in it. She plays an Interpol officer in the film who is chasing the character essayed by Kichcha Sudeep. The movie has garnered huge anticipation as the part 1 and 2 are huge hits and movie has been talked about ever since it was announced. Shraddha definitely will make a great Interpol officer as we know her flair for strong characters.

We spoke to her and here is what she has got to say, ” This is one of the biggest releases in Kannada. I play an Interpol officer named Kangana, who along with Aftab Shivdasani, is trying to chase the character of Kichcha Sudeep sir. I cut my hair short for the role around 10 times since the shoot went on for some time. I prepared by seeing some movies where actors have played cops or Interpol officers and the footage of some actual officers. The female characters in the series Line of duty were also a major inspiration for me. It is slated to release on the 14th of this month and we are all very excited about it. It has been much awaited and the audience is really looking forward to it. Love and light to all.”

We wish Shraddha Das and the entire team of Kotigobba 3 all the luck.