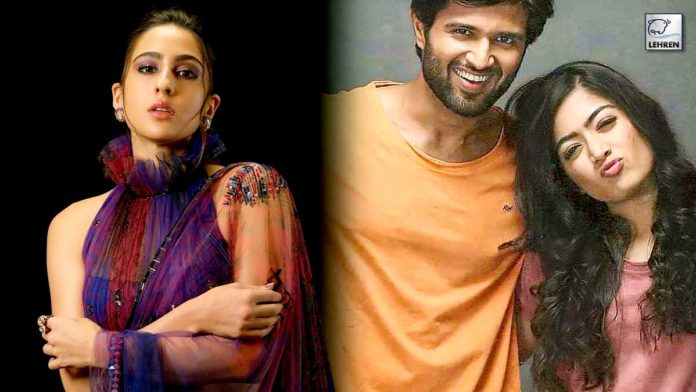 Bollywood actress Sara Ali Khan recently appeared on Karan Johar’s chat show, Koffee With Karan season 7. Meanwhile, during the episode the actress was seen accepting having a crush on ‘Liger’ actor Vijay Deverakonda, however, the actress made a shocking revelation about Vijay Deverakonda’s love life as she hinted toward Rashmika Mandanna.

In the latest episode of Koffee With Karan, actress Sara Ali Khan was seen sharing some very candid confessions and steaming gossip with her Bollywood BFF Janhvi Kapoor. The two made their appearance on Karan Johar’s chat show as they shared their conversations about their crush and relationships. During the episode, Sara Ali Khan was seen confessing about having a crush on ‘Liger’ actor Vijay Deverakonda. While refusing to name a name at first, she eventually gives in and admits saying ‘it’s Vijay Deverakonda’.

That’s not it, the actress also made a shocking revelation during the rapid-fire round, when Jhanvi was asked if she keeps a tab on her contemporaries. She revealed that at one point in time she was intrigued by how fast Rashmika’s Mandanna’s Insta was growing. Sara took Vijay’s name hinting Vijay and Rashmika, who has starred in Geetha Govindam, are dating.

However, this is surely not the first time that Vijay and Rashmika remained the center of attraction for their alleged dating relationship. The two South superstars have often been spotted together on many occasions be it when the duo was spotted hanging out for dinner in Mumbai, during their gyming sessions, and more. The two have always been in the spotlight for their rumored relationship. However, rumors surfaced about the duo during the time of the release of their film Dear Comrade where the reports about their wedding surfaced the social media.

Meanwhile, on the work front, Sara will be seen in director Laxman Utekar’s next yet-to-be-titled film alongside Vicky Kaushal. Apart from that she also has ‘Gaslight’ with Vikrant Massey and Chitrangada Singh. On the other hand, Vijay Deverakonda is currently gearing up for his film ‘Liger’ which also stars Ananya Panday. Whereas Rashmika Mandanna will soon be making her Bollywood debut with multiple projects in her kitty like ‘Animal’ with Ranbir Kapoor, and ‘Mission Majnu’ with Sidharth Malhotra.