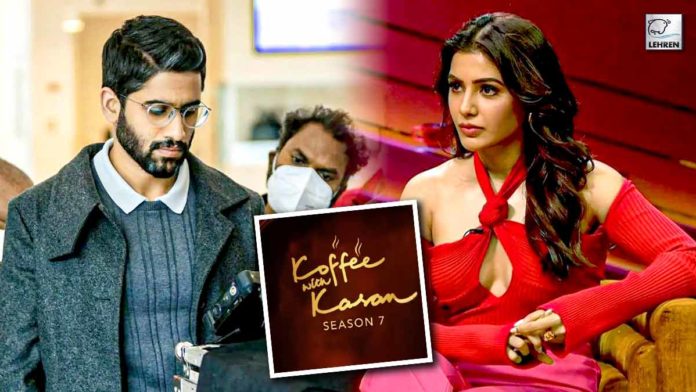 Actress Samantha Ruth Prabhu recently made her debut at the much-talked-about show, Koffee With Karan with actor Akshay Kumar. Meanwhile, actor Naga Chaitanya has now also opened up about his desire to appear on Karan Johar’s chat show. Talking about the same the actor said, “On Koffee With Karan, why not if I get a chance?”.

Naga Chaitanya Expresses His Desire To Appear On Koffee With Karan

In a recent conversation with India.com, Naga Chaitanya revealed his desire of appearing on Karan Johar’s chat show ‘Koffee With Karan 7’. Naga said, “On Koffee With Karan, why not if I get a chance? Karan Johar is great, I love the work he does. If he wants to have me, why not?”.

While talking about his personal life the actor said, “I’ve sort of built myself in a way where my personal life doesn’t affect my professional life. When your personal life is at the forefront in the media, that and not your professional life becomes the headline, it gets a little irritating and frustrating. You don’t like it when your personal and professional lives are connected. I don’t connect it and I’ve created a very clear barrier between the both. So, it’s sad sometimes to see people connecting my personal life to my films out of nowhere… or what someone said or what happened. But unfortunately, that’s the way it is today and I just teach myself to keep working harder… at my work and make sure my work shines, and eventually, it will.”

Meanwhile, recently Samantha opened up about her divorce and admitted having hard feelings for her ex-husband Naga Chaitanya. The Oo Antava sensation recently appeared on Koffee With Karan Season 7 along with Khiladi Akshay Kumar. While on the couch, host Karan Johar asked Samantha, “How your life has been post-divorce?”. To this, Samantha replied, “It has been hard but it’s good now. It’s fine. I am stronger than I have ever been.” Karan then asked, “Are there any hard feelings?”. Samantha replied, “You mean if you put us both in a room, you’d have to hide sharp objects? Yes, as of now.”

Karan then asked Samantha about the social media trolling that she had to face after separating from Naga Chaitanya. She said, “So, I couldn’t really complain about it because I chose that path, I chose to be transparent and I chose to reveal a lot of my life. And, when the separation happened, I couldn’t be too upset about it because they invested in my life and it was my responsibility to have answers which I didn’t at that point in time. I think I came out of it okay, better than okay.”