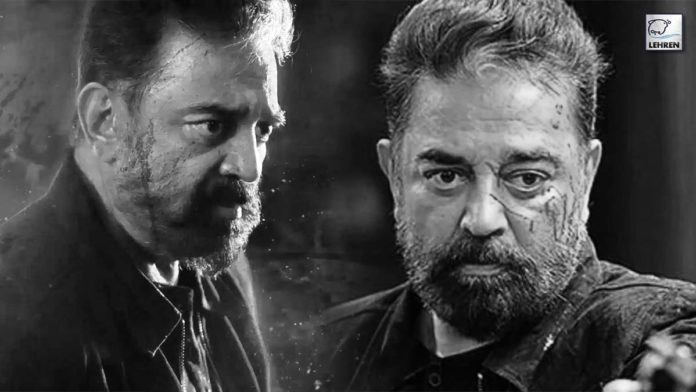 While Kamal Haasan's latest film Vikram had several whistle-worthy moments for the Tamil audience, the same were lost on the Hindi film crowd.

In the post-pandemic era where action entertainers from the south with a dash of emotion have been sweeping the Hindi box-office (Pushpa, RRR, KGF2), Kamal Haasan’s new thriller failed to enrapture the audience in the north. It was the comeback film of a major celebrity who’s recognised as a thespian all over India, an action-packed film that won so much applause that it has become the biggest blockbuster of Kamal Haasan’s career.

Budgeted between Rs 120 and Rs 150 crore, Vikram(2022) has grossed over Rs 400 crore in its worldwide collections. Welcomed and embraced by Kamal’s wide network of fans in south India and abroad, Vikram may well be one of the top ten grossers of all time in Tamil cinema. “But it registered feeble collections of barely Rs 10 crore in the Hindi market,” trade analyst Narendra Gupta commented while supplying the figures.

Intriguingly, most of the factors that made it such a thumping success worked against it in Hindi.

One of the reasons put forth by analysts pointed to Kamal Haasan himself. All the south films that have done well in Hindi featured fit young heroes like Allu Arjun, Ram Charan, NTR Jr and Yash.

Also Read: Why PUSHPA Is A Hit & 83 Took A Hit – Analysis By Bharathi S Pradhan

“Kamal Haasan is an ageing hero whose action cannot be compared to that of say, a younger and far more agile Allu Arjun in Pushpa,” remarked Gupta. “Besides, Kamal Haasan is known to the Hindi audience which has rejected him in the past too.”

Unlike the south, especially Tamil Nadu where Kamal Haasan is still a craze and has a throbbing fan club culture, Kamal’s many earlier forays into Hindi cinema too were unsuccessful.

Gupta added that Vikram was also not promoted well in the Hindi market. Which was surprising because it was produced by Kamal Haasan’s Raj Kamal banner and was dubbed in Hindi with the specific intention of going into this market.

“The awareness that an exciting film is on its way was missing,” amplified popular film trade journalist Komal Nahta. “The low-key promotion could be partly because the makers didn’t devote much time and attention to the Hindi film market in spite of the fact that they dubbed it in Hindi and were therefore, keen that it should do well in Hindi.

“It was also partly because Kamal Haasan did not work in Hindi-speaking areas even in his prime.”

A huge plus in the south market was the presence of Tamil film star Vijay Sethupati whose very entry as the antagonist had an orgasmic effect on his audience.

It was exactly the reverse in Hindi. This audience had no clue who he was and all they could see was an ungroomed villain who entered the screen doing something disgusting to a gold tooth in his mouth, an action that was repeated ad nauseam. And he was introduced with a swagger as a criminal with three wives.

Other star attractions that delivered gold for Kamal were Malayalam star Fahadh Faasil and Tamil superstar Suriya who made a special appearance at the end.

Unfortunately, seeing Kamal Haasan-Vijay Sethupati-Fahadh Faasil in the same frame didn’t generate the same excitement in Hindi as it did in the south market. Nor did Suriya’s entry as Rolex, the ultimate criminal.

Also, the first hour of the film was an incomprehensible beginning for the Hindi film viewer who was neither awestruck by the stars nor understood what exactly was going on until the narration finally settled down to make sense.

As Komal pointed out, “The film had references to Kamal’s earlier film Vikram (1986) and it confused the masses. Confusion often means lack of positive word of mouth.”

“The word of mouth was that it was a below average entertainer and therefore quite avoidable,” remarked Narendra Gupta.

Like Marvel in Hollywood and Rohit Shetty in Hindi cinema, director Lokesh Kanagaraj is out to make a Lokesh Cinematic Universe (LCU). His winning formula has been plenty of bone-crunching action from a rough-tough hero whose soft side has a strong emotional connect with a child. In Master (2021), hero Vijay fought for youngsters in a juvenile home who were being used by Vijay Sethupathi as a cover for his criminal activities. In Kaithi (2019), hero Karthi, just released from jail, couldn’t wait to meet the little daughter he’d never seen. In Vikram, Kamal Haasan and his band of masked vigilantes punched and gunned down all opposition while protecting his infant grandson.

Check Out: Review | Rocketry: The Nambi Effect – Packed With Fuel But Doesn’t Quite Land

The 2022 Vikram was also publicised as a “spiritual sequel” of Kamal Haasan’s 1986 film that had the same title, and as the second in the Lokesh Cinematic Universe. Kaithi was the first.

Therefore, there were references to “Dilli”, the hero of Lokesh’s Kaithi and to Kamal Haasan’s 1986 film which perplexed the Hindi audience that was not acquainted with these films or their storylines. Kamal’s 1986 film had also featured him as the relentlessly violent Commander Vikram but who’d remember a 36-year-old film? And how many of the Hindi audience would be familiar with Lokesh’s Kaithi or its hero Dilli?

So while Vikram had several whistle-worthy moments for the Tamil audience, the same were lost on the Hindi film crowd.

The main takeaway from the Vikram story is that appealing to a pan-India audience will always pose the biggest challenge to any filmmaker.