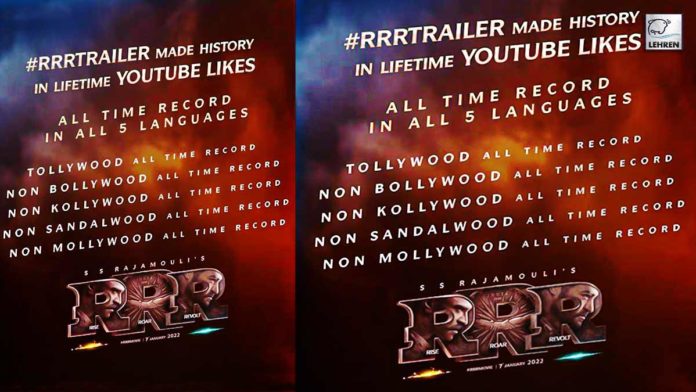 The glimpse of the patriotic story has received more than a 1.2Million likes worldwide.

Makers of “RRR” recently revealed the trailer and the audience has been pouring in their tremendous love for the much-hyped period action drama. The glimpse of the patriotic story has received more than a 1.2Million likes worldwide.

The trailer has topped the charts of the Most liked Pan India Movies Hindi trailer of all time, even breaking the record of the mighty “Baahubali”. The “Baahubali” franchise created the biggest of records in the multi-lingual cinema, rightly being called the biggest Pan India film. Now, with RRR assets coming out, the film is touted to shatter all the previous records.

With 1.221Millon likes, “RRR” has toppled Pan India films like “Saaho”, “2 Point O”, “Baahubali 2”, “KGF Chapter 1”, and “Pushpa”. The film has scripted history in the lifetime of YouTube likes and has created an All-time record in all 5 languages.

“RRR” featuring Ajay Devgan, Ram Charan, Alia Bhatt, and Jr NTR is a massive thrill and it has already amassed a huge fan base from all over ever since the trailer dropped in.

Jayantilal Gada (PEN) has bagged the theatrical distribution rights across North India and has also bought worldwide electronic rights for all languages. Pen Marudhar will be distributing the film in the North Territory.

ALSO READ – Kamya Punjabi Gets Trolled Over Second Marriage But Pooja Bhatt Has Her Back!