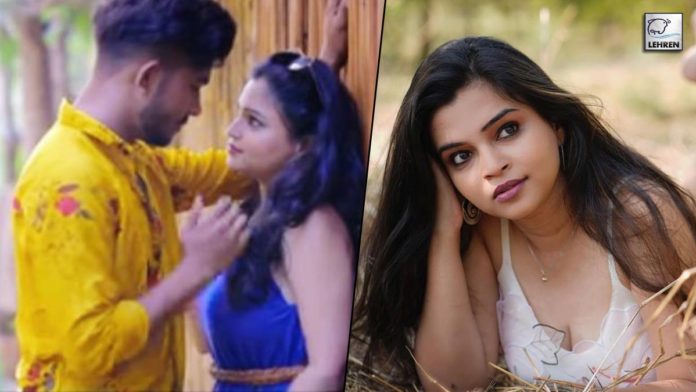 Shreya Kulkarni is currently enjoying the success of her hit song ( Dimple yetay galavar) which has reached to almost 3.5 crore public.

The genuine and hard-working personality Shreya Kulkarni is thankful to her followers and lovers for the success of her hit song ( Dimple yetay galavar) which has reached to almost 3.5 crore public. Shreya is not only a beautiful soul but also a great actress. This song was shot in the scenic beauty of Goa. Shreya got an opportunity to sign this song only because of Director Amey Joshi who is her co-actor in this song.

She canceled her presence at her uncle’s wedding for the shooting of this song and she believes that this was her best decision as this song gave her a different identity in the film industry. Shreya is not only becoming famous because of her photoshoots but also her acting skills. Her acting in daily soaps and movies gave her a grand entrance into the entertainment industry followed by her hit song (Dimple yetay galavar).

This song was composed in SPINELEAF STUDIOS and DI and edit was done by Siddhesh Kulkarni who is the owner of this studio.

“Dimple song not only won everyone’s heart but also gave a different and fantastic perspective towards Marathi music industry,” says the composer of the song.

Shreya gave a success party rejoicing her happiness for the great success of this song.
She says, “Dimple yetay galavar(dimple coming on cheeks) the name only specifies the beauty of the song. This song is becoming popular and is on everyone’s lips these days.
When I was cast for this song I never knew that the song’s success would go to this height. I am thankful to each and every single viewer of the song. This song made my identity.”

Shreya is now a settled and an established actress in the industry. She says that her journey from Jalgoan to Mumbai was too hard. She is thankful to God for her safe and successful journey in the film industry.

“The only support of my mother brought me here,” Shreya added.

This confident lady will soon be seen in her upcoming album which will catch everyone’s eye. Shreya says “Courage and fearlessness are only two keys for success in the film industry for women.”