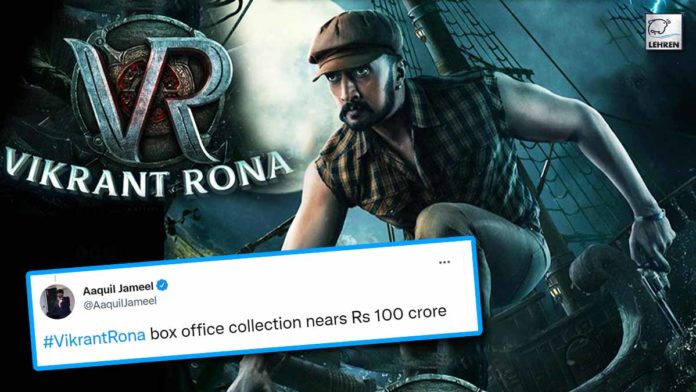 The fantasy action adventure thriller follows the story of Police Officer Vikrant Rona as he is assigned to investigate an unusual mysterious murder case in a forest village. The film opened to mixed reviews but it collected humongous earnings on Day 1 of its release. While during its fourth day the film brought the highest number on the box-office collection as now the movie is believed to have surpassed the benchmark of Rs 100 crore worldwide.

As per the predictions, Kiccha Sudeep starrer Vikrant Rona has earned a total of ₹29 crores on its fourth day of release which was on Sunday. Which has taken the film beyond ₹110 crores. Meanwhile, Ranbir Kapoor’s film Shamshera has somehow managed to get  ₹40 crores out of the whole week.

Vikrant Rona is said to have collected Rs 40 crore at the box office on Day 1. In the Hindi belt, it managed to collect Rs 1 crore net. Many 3D shows were houseful by the night in southern states. According to a tweet by AndhraBoxoffice, it grossed Rs 2 crore in the region.

It was reported by some trade experts that Vikrant Rona clocked Rs 7 to Rs 9 crore in advance bookings, with the majority of the revenue coming from the Kannada language. Vikrant Rona was reportedly released in 14 languages across the world. It provides a dark 3D experience to the audience. The film currently stands a rating of 9.3 on IMDb.

Vikrant Rona stars Kichcha Sudeep in the lead, along with Jacqueline Fernandez, Nirup Bhandari, and Neetha Ashok. The pan-world 3D film has been released in multiple languages – Kannada, Tamil, Telugu, Malayalam, and Hindi. The film is being directed by Anup Bhandari and produced by Jack Manjunath under his production Shalini Arts, and co-produced by Alankar Pandian of Invenio Origins. Vikrant Rona is now out in theatres from July 28.