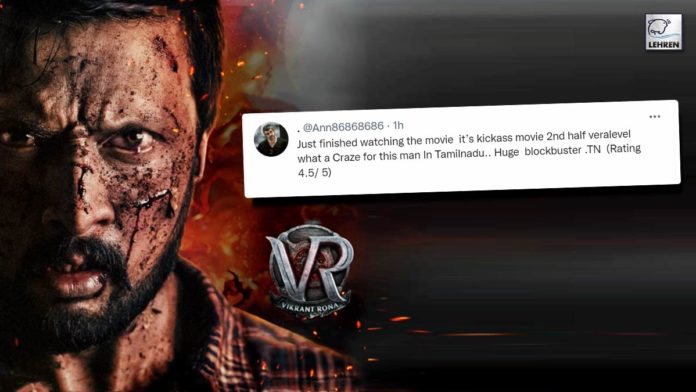 Vikrant Rona Twitter Review: Kiccha Sudeep’s starrer Vikrant Rona has finally hit the screens. The film went down in the theatres on 28th July 2022, soon after which the early watchers shared their reviews on Twitter praising the film for its visual experience and Kiccha Sudeep’s performance. Check out the Twitterati review on Vikrant Rona-

Kiccha Sudeep’s much-awaited adventure fantasy film ‘Vikrant Rona’ is out in the theatres now. The film stars Kannada superstar Kiccha Sudeep in the lead role along with Nirup Bhandari, Neetha Ashok, and Jacqueline Fernandez. The film has previously been hailed for its visual effects and Kiccha Sudeep’s stellar performance in the film, while as per the reports the film has already collected over 7.07 crores with its advance booking.

Meanwhile, now the early watchers have shared their reviews on Twitter, a user wrote, “Just finished #VikrantRona… what a stunning visuals and making… #kichachasudeep Sir swag and acting..the story is completely unique and surprises a lot … Pure theater experience Cinema”. Praising the visual effects of the film a user wrote, “Stellar performance [email protected] another milestone from #kfi this one is a must watch especially the #3D experience is top notch”, another user wrote, “Just finished watching the movie it’s kickass movie 2nd half veralevel what a Craze for this man In Tamilnadu.. Huge blockbuster .TN”.

Vikrant Rona stars Kichcha Sudeepa in the lead, along with Jacqueline Fernandez, Nirup Bhandari, and Neetha Ashok. The pan-world 3D film has been released in multiple languages – Kannada, Tamil, Telugu, Malayalam, and Hindi. The film is being directed by Anup Bhandari and produced by Jack Manjunath under his production Shalini Arts, and co-produced by Alankar Pandian of Invenio Origins. Vikrant Rona is now out in theatres from July 28.