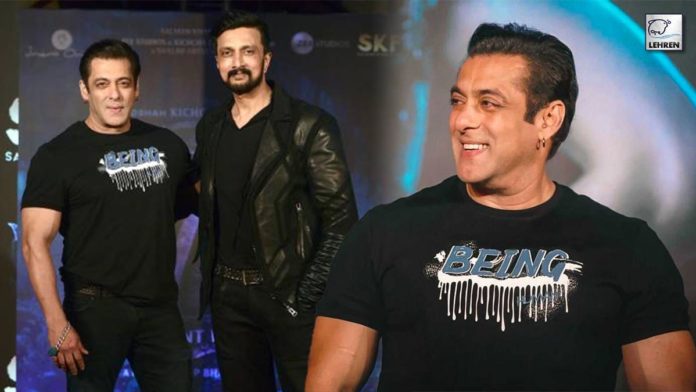 VikrantRona: Bollywood actor Salman Khan was recently spotted at ‘Vikrant Rona’ promotional event in Mumbai with actor Kiccha Sudeep. The actor came on board to present the Hindi version of the film, meanwhile, during his visit, Salman opened up about backing Kiccha Sudeep’s film saying, “I don’t want to go into losses… South films are doing really well.”

On Monday, Bollywood actor Salman Khan made an appearance at Vikrant Rona’s promotional event in Mumbai. During the event, Neetha Ashok who is also a part of the cast was seen telling Salman Khan about how she couldn’t believe that the actor shared the film’s trailer on his Twitter account. Reacting to this Salman said, “Mam, I’m also presenting the film. I have to do this. I don’t want to go into losses. The film is releasing this Thursday. And you know, right, that South films are doing really well?”.

Salman Khan And Kiccha Sudeep On North Vs South Debate

Meanwhile, actor Kiccha Sudeep was also asked about the South films doing well at the box office and whether he feels his film Vikrant Rona too would manage to break records. To this, he said, “I hope it is that way, I don’t want to say much. I also don’t want to generalize all that. There are several films that are made in the south, and not every movie does well. We cannot call it domination. There are good times for everything. If the Hindi film industry wasn’t doing great films if it didn’t have great people, how would you sustain the industry for so many years? It’s like Virat Kohli is out of form for a while. Are you going to take away his records? It doesn’t work that way. At the end of the day, there are lots of films being made, some work, some don’t.”

Meanwhile, on the same Salman said, “We all try and make the best film, we want it to reach everyone. Sometimes it works, sometimes it doesn’t. There’s no formula to this, that something will work 100 percent”.