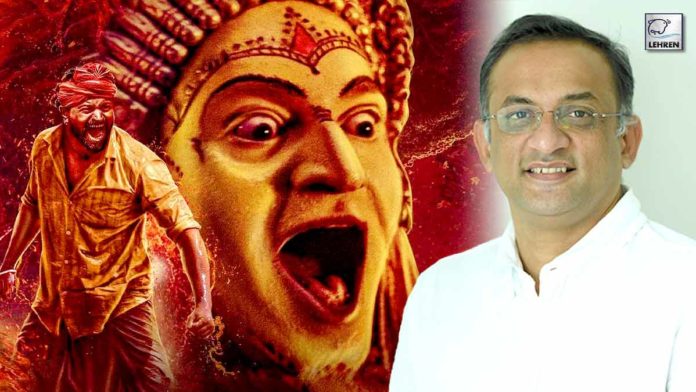 Rishab Shetty’s Kantara is being highly lauded by everyone. From Kangana Ranaut to Prabhas to Dhanush Kannada blockbuster has attracted many celebrities. Praises for the latest release Kantara are unstoppable. While the movie is flooded with admirers and glories the new one to join the list is Baahubali producer.

Shobu Yarlagadda who produced the Prabhas starrer Baahubali series is full of praise for Kantara. He who bankrolled the period epic drama took to his Twitter to write a review after he watched Rishab Shetty’s blockbuster movie. The producer was mind blown to see such a film stating no film till now had made no mark on him. He also called it cinematic brilliance.

The tweet by Shobu Yarlagadda read, “#Kantara! Mind Blown! No film has touched me at the core as this film! Its cinematic brilliance!! The climax..Oh my god!  Please watch it in theatres! What performances, cinematography and music! Take a bow @shetty_rishab @hombalefilms and the entire team!”.

Kantara’s production company Hombale Films was glad to receive the tweet from the Baahubali producer. Homable Films replied to the tweet writing, “This just lit up our Diwali. Thank You @Shobu The climax is indeed catching up for a universal fan base.”

A day before the film’s Telugu release, Prabhas also appreciated the film. He watched the movie for the second time and took to his Instagram account to share his experience. The Radhe Shyam actor wrote, “Watched #Kantara for the second time and what an extraordinary experience it has been! Great concept and a thrilling climax. A must watch film in theatres!!!”. When he had seen the film for the second time he had taken to his Instagram Stories and wrote, “Thoroughly enjoyed watching #Kantara, especially, the climax. Congratulations to the entire team and wish you’ll all the success!”.